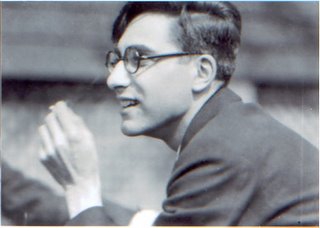 The American Poets Project, from the Library of America, is in the process of creating some of the most attractive poetry books ever made for English-language readers. The latest, #22, is Louis Zukofsky (pictured here), Selected Poems, edited by Charles Bernstein.

The collection has been rethought as a meta-text (or what I call meta-anthology) which excerpts the unexcerptable (the long poem A for instance) thereby recontextualizing how these pieces, these words, click together - a sort of one man canon-reshuffle.

The brief introduction by Bernstein is worth the price of the book alone (especially as most will have A on their shelves already, from the University of California press, all 826 pages of it). He draws attention, especially, to the cultural and linguistic differences in Zukofsky's background (his parents spoke Yiddish) that make him such a clear corrective to Eliot, without tipping the balance. Zukofsky is launched by, even as he writes against the specter of Eliot, in a poem like "Poem Beginning 'The'" - with its numbered lines, such as the Prufrockian number 58 "Do we dare say".

Zukofsky is a poet who could have become a William Carlos Williams but went farther than (even) he did with Paterson. By this I mean, his early short poems are in the Williams vein - yet already they are stranger, and so refreshing, reminding those in the mainstream how divertingly good poems can be when they are not what we expect, but what we could never have anticipated.

For example, the poem from 29 Poems, number 5, "It's a gay li-ife" provides perhaps the most fun lines of that era (and not much today is more thrillingly alive to its own sonic and syntactical making): "There's naw - thing / lak po - ee try".