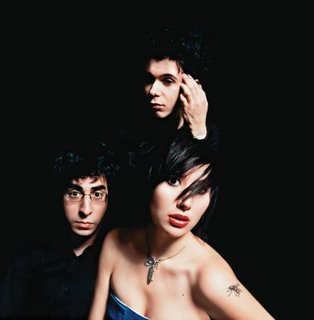 The second album from (the) Yeah Yeah Yeahs (i.e. Karen O, Brian Chase and Nick Zinner - pictured left) is one I've been listening to all week, in a state approaching mild euphoria (that famous oxymoronic condition).

Forget Arctic Monkeys or the new The Strokes (oh, yeah, you already had, sorry) - this may be the best commercially-released indie rock album of 2006, so far.

The last time three members of an American band sounded this good was maybe 15 years ago, and that was Nirvana. I am not making claims for greatness here - I don't think the lyric-writing talents are on par with Cobain, who was a strangely genuine genius - but the energy, the style, and the sound are up there.

What's lacking is originality, and I have to say, in this instance: so what?

Karen O practically channels Siouxsie here (particularly of the underated great album from '91, Superstition, at the time blindsided by Nevermind), on the album's best tracks "Dudley" (with OMD chiming start), "Turn Into", "Deja Vu" (a bonus track ironically) - and the masterpiece - "Cheated Hearts" with its impressive claim "sometimes I think that / I am bigger than the sound" - which becomes, in the context of this matrimonial mind game (running rings around rings) - as it reaches its climax - a credo of sweetly monumental proportions ("take these rings / stow them safe away / wear them on / another rainy day").

This is one of the best retro-alternative, yet fiercely-of-the-moment American albums since 2000.
Email Post
Labels: music