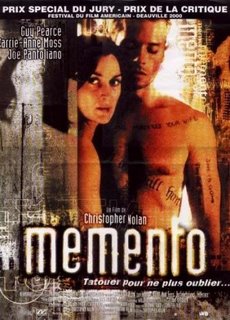 I used to write film reviews for Look in the late 90s and early 00s.

Very occasionally, Eyewear will feature a rearview-mirror glance back at some of the classic, and not-so-classic, films I reviewed then.

Today, a masterwork of looking back, Memento.

MEMENTO is indelibly haunting and agonizingly suspenseful. The plot, despite its never-ending flashbacks, comes down to an elegant high concept, teased to perfection by new director and writer Christopher Nolan.
Leonard is a former insurance adjuster whose wife has been raped and murdered. In the attack, he received a massive head injury. Because of this, he has lost the ability to “make new memories” - everything he can recall is from before the horrific crime.
Imagine a world where you literally forget everything (except your name) every ten minutes. Leonard (played with intensity by Guy Pearce) is constantly waking up from a bad dream into a worse one. Where is he? Why does he have bloody marks on his face? Who is the woman sleeping in the bed beside him? Why is there a gun on top of the Gideon Bible in the sleazy motel room?
The only way he can keep any semblance of identity together is to follow a rigorous self-imposed regimen of short-term remembrance. This means he has tattooed his body from head to foot (backwards so it’ll read right in the mirror) with “facts” like “your wife was raped and murdered” - and the name of the prime suspect “John G.” he is obsessively hunting down to kill. There’s even a space above Leonard’s heart where he plans to tattoo the fact he’s got revenge, so he won’t forget that either.
To keep his day from disintegrating six times an hour, Leonard takes constant Polaroids of the things that matter most, like “my car” and the motel he’s staying at. His best friends — at the moment — seem to be a tough little guy called “Teddy” (Joe Pantoliano) and a skanky waitress named “Natalie” (Carrie-Ann Moss, as dark and sexy as in The Matrix).
On the back of their photos, he’s marked guides to their intentions, indicating whether they are liars or allies. Leonard has learned to trust only the notes he leaves to himself. As he says, with a condition like this, you have to be a good judge of your own handwriting.
Unbearably, we know (just a little) more about what his shady new friends have planned for him, and are forced to watch as Leonard stumbles from moment to moment, guided by the flimsiest of notes, photographs and pen marks on his hand. Sometimes this blind stumble through lost memories is so frustrating it’s funny. An existential x-ray as inevitable as a slow-mo bullet, this is the Film Noir equivalent of Dostoyevsky.
MEMENTO is one of the most thought-provoking and moving examinations of memory, love and betrayal ever put on film. It’s also a sly commentary on the mutability and impermanence of all images, including those committed to celluloid. As such, it’s as much about us, the audience, as it is about what’s flashing across the screen. You’ll leave the cinema suspicious of your loved ones and yourself.
You will never forget to remember things differently from now on.
Email Post

Fox_Die said…
Memento being one of my favorite all time films does things that other movies try to do, it leaves you with the feeling of wanting more. It did many things right and so little wrong. me as an inspiring writer/director, look to this movie for inspiration. Christopher Nolan truly made a film to remember.