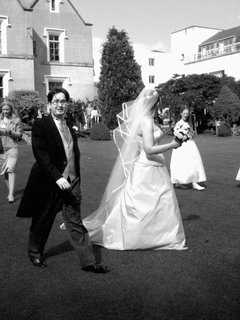 I actually thought this would be a moment of profound stock-taking. And it is, except, my first decision was to defer despair until 45, which is the new 40. 50 is now where middle-age, to me, kicks in. But I did make a list. See below...

12 THINGS I HAVE ACHIEVED BY 40 BUT DIDN'T EXPECT

Married To A Wonderful Person
Gainful Employ
Poet-in-residence, Oxfam
Published a Bunch of Books (A Few Quite Good)
Got To Write Poem For A Royal Wedding
Review Books For Books In Canada
Lived in Cool Cities Like Budapest, Paris and London
MA (Distinction) From A Really Good Creative Writing Programme
Have Maintained Close Ties to Many Of My Dearest Friends
Don't Smoke, Jog Frequently, Rarely Ask For Second Helpings
Am Frequently Happy, Often Content, and Usually Optimistic
Flew To Japan For Many Hours Without Fear
Email Post

I turn 39 in 2 weeks and have been sort of taking stock.

I recently moved to the USA from the UK and it's been a struggle, in part I feel, because I am heading towards 40 and find it more difficult to start again with friendships etc. In my younger days I found it so much easier.

Anyway, I just wanted to say that from reading your page, Your achievements speak for themselves and I am happy that you seem to be content without having to stick to your first "thought I would have" list.

Good luck to you in all you undertake in the future.

Anonymous said…
Sounds like you've lived a good life, congratulations. Tonight is my last night in my 30's and I found this site. Like you did, I am going to make a list of the many fab and totally cool things I've done. I still have another 40 or so years left in me...so do you... What will be next???? And at what year of age are you going to post about? I'm going into my 40's with FIRE..there is sooo much more I want to experience, but for tonight I contemplate alone. Best Wishes To ALL!
Tue Nov 27, 01:52:00 am 2012