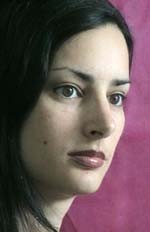 The results of the CBC Quebec Short Story Competition 2005-2006 were announced at the Blue Metropolis Literary Festival in Montreal last weekend. The competition, now in its seventh year, plays a vital role inthe English language literary community in Quebec. Each year the three winning stories are broadcast on CBC Radio One, and every three years Véhicule Press publishes an anthology of winners and honourable mentions.

Among this year's winners is Montreal-based poet, fiction writer and webartist J. R. Carpenter (pictured above) whose work I have published recently at Nthposition, and also in the anthologies Future Welcome and 100 Poets Against The War. Her winning story, "Air Holes", weighs in at a sparse 921 words, yet, with the help of eight or nine characters somehow manages to be both sad and funny.

Here's the opening paragraph: "The tide will go out at two today. The kids and I will go down to the beach. Between the tidemarks, beneath our feet, tight-lipped steamerclams will burrow sandy deep. But we will find them. Their air holes will give them away."

Carpenter is - strikingly - a previous winner of the CBC Quebec Short story competition (2003-2004) for her story "Precipice" which was recently anthologized in Short Stuff (Véhicule, 2005).
She is also a Web Art Finalist in the DrunkenBoat PanLiterary Awards 2006. Her web art/poetry project "How I Loved theBroken Things of Rome" is launching at the Museum of Contemporary Canadian Art in Toronto April 13, 2006; and her web art/poetry project Entre Ville is launching at the Musée des beaux-arts in Montreal April 27, 2006. More information can be found on her website at: http://luckysoap.com/
Email Post