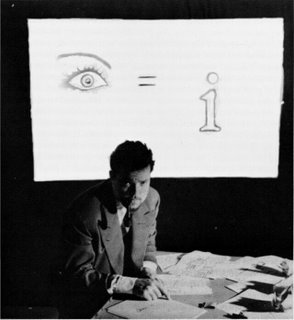 Readers of Eyewear have commented on the transition from the original name of this blog, to the new one.

I offer this image as one possible clue to the shift in title.

Orson Welles, one of my heroes, knew the shock value in modernism's willingness to project the artist's project.

However, his brand of modernism's constant willingness to put himself, and his auteur status, front and centre, remains a dramatic challenge to his radical other, T.S. Eliot, the objective impersonal author (supposedly) - the only other American of the age equal to him in terms of genius-as-cultural-influence - and remains a radical challenge to post-structuralism's death-of-author.

As film-maker and magician, Welles knew that some hand had to hide, and guide, the forces behind the camera eye - it might as well be his, or said to be so.

So it is, I have always loved the moment, in one of his creations, when he intones the thrilling words - I am Orson Welles, and I directed this picture - or some such statement. To me, Welles is the father of the blog, and its very power, which is to make each one of us an auteur, unafraid to say so, and to come out of the dark, like mercury flashing, and present our selves, as images, ideas, theatre of the mind.