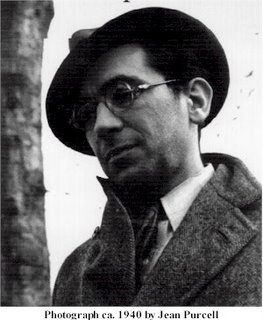 From time to time, Eyewear will narrow its gaze and consider a poet of the past whose writing should be attended to in the present.

Fearing was my favourite poet when I was an adolescent one winter, and I recall reading his cynical proletarian broadcasts on the page (from an anthology of "modern verse" my mother had used in college) with a vital thrill - the sky was a dark blue, and it was very cold outside, and this seemed like the world as it was to me then (sometime at the start of the Reagan-Thatcher 80s it must be said). But then, he seemed to slip from view - mine, readers, critics, anthologists - until quite recently.

I suppose what held against him was his life (somewhat shabby and unattended) and his broadly observant, but political poems, that were not in favour for a time; and his mordant, almost accidental Marxism. To one generation, he was the news; to the next, he was old news; and to ours, he seems to be returning as news that never staled. But, pulp novelist that he was, he must have sensed that style is the key - and I think he's a bit of a master of that.

I think an element of my poetry which is (and more often was) public in its pronouncements, and satirical, emanates like a long-lost radio wave from that time. I think I also loved the slovenly noirishness of his look, his person. At times, it almost seems as if he was single-handedly the only American Communist poet writing anything of interest during the spectacularly interesting period of the 30s through WWII - and certainly the only one doing so while wearing a fedora. Meanwhile, his crime novel The Big Clock was a Hollywood hit, so there was that twist in the tale - a dialectical man then, with hands turning both ways - towards profit, and a critique of capital. There's mystery in that, too, which he could've mined more.

I'll be reviewing the Fearing volume from the APP series mentioned in a previous post (it is number 8) when it arrives in the post.

In the meantime, here's a good biographical sketch: