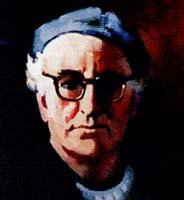 I was in Ireland for Easter, at an auspicious and controversial time - the 90th anniversary of the Easter Rising.

I also had a chance to talk with my friend, Fr. Brennan, who sometimes lectures at Fordham but is also a parish priest. His moving, thoughtful Easter Sunday homily included references to both Patrick Kavanagh (pictured) and Howard Nemerov - surely a unique occurence in Christendom this year?

Seamus Heaney's new collection, District and Circle, was ubiquitous, and was book of the month at Hughes & Hughes (the airport book sellers among other things) - and he also received a glowing review in - of all places - The Economist. Will read it more closely in days to come. The poems I did read were satisfyingly tight, crafted and palpable - evoking the real presences of things of this world - it seems a late, valedictory collection.

Andrew Motion, in his Guardian review, noted (I write this from memory) that while it did not surprise with new tactics or strategems, the new Faber collection confirmed the necessity of Heaney's project - which seems to be to establish (even sanctify) a good relationship between word and world, one that is creative, healthy, and optimizes the best that both language and experience have to offer each other; it is a deeply gifting (and gifted) act to be pursuing, and one that is radically conservative in nature.

As always, I am torn between my appreciation of such stately care placed at the service of poetry's grand tradition, and, an urge to chafe at the bit, and pursue newer, and sometimes less redemptive tracks. Poetry also, it seems to me, troubles as much as heals.

While in Dublin, I picked up Vona Groarke's latest, Juniper Street, just out from The Gallery Press, which does a good-looking book. Groarke was based in Dundalk but now lectures in America. Look forward to reading her new one.

I also noted the new Selected series from Penguin - James Fenton, Roger McGough and Carol Ann Duffy out now - Hill and Mahon and Sophie Hannah out this summer. The books are beautifully designed, and will hopefully bring new readers to these essential poets; Hannah is young, and it is most impressive to see her up there with the others.

I also bought the new Selected from John Burnside, just out from Cape, so a lot of reading next month.
Email Post