Showing posts from November, 2013
Show All

THE PROBLEM WITH MOST BRITISH POETRY REVIEWS 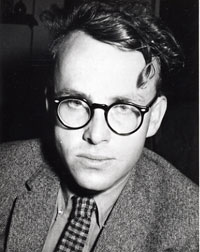 When you read a film review in a newspaper or magazine, from The Guardian to Sight & Sound , a few things are assumed: one, the reader and the critic are both concerned with the same issue - is it a good film the reader may enjoy - should she go see it?  Two, they both generally agree on how to evaluate that key question of going to see the film.  The film will be discussed in terms of story, plot, acting, directing, and, if it is a more intellectual review, the camerawork and mise-en-scene; perhaps theme or genre will also be discussed.  The movie may be put into the broad context of other similar films (as in, the new Carrie film compared to the first adaptation by Brian de Palma ). The reader may then decide to go see the film, and they may either feel that the critic's three stars were too few, or too many.  But they will understand, broadly, that the critic did a fair job, and was acting, as one person communicating clearly to another.  Now, whenever someone reviews
Post a Comment
Read more

- November 30, 2013
Jessica Mayhew reviews Division Street By Helen Mort And what she sees she cannot tell, But what she knows of distances, And doesn’t say, I know as well. (‘Fox Miles’) Division Street is a collection marked by distance. Stirred by a sighting of a vixen in ‘Fox Miles,’ Helen Mort sees this knowledge embodied by, and shared with, the fox. There are many landscapes travelled in this collection, landscapes that are often strange, or disorientating. However, the poet handles these with subtlety, knowing what to keep concealed to brighten her scenes. This is a collection of division and reconciliation; whether of the miners’ conflict, relationships gone awry, or journeying to unknown places, things rendered are brought back together with the poet’s delicate touch.        Mort’s fascination with distance is introduced in the first poem: ...staring out to sea, as if, in the distance there’s the spindle of a shipwreck, prow
Post a Comment
Read more

Death On The Clyde

- November 30, 2013
Eyewear is very sad to learn of the terrible accident in Glasgow last night, on the eve of St Andrew's Day.  Glasgow is a city this blog loves, and we hope its people can recover from this tragedy with the resilience, good humour, and dignity they show in adversity.  Our wishes are with the families of the victims, dead or injured. We wish the city, and its people, as quick and full a recovery as possible.
Post a Comment
Read more

- November 29, 2013
SWIPE RIGHT   No point harassing the Niceday highlighter. The busted bust of Palas in the palace, alas, Is all the marbles you get in Poetrydom, More or less.  Poetry tends to get, fast,   Unfriended, in this pacey age of sub/dom. My poetry job ended at half-time, ushered Out with the blinded majorettes (pom-poms, Falling).  What remains on the field are   Meatheads bulleting each other’s hurtlocker Torsos. Ever rooted for a side you shouldn’t Have, mate? Taliban verse was reviewed I gather. Favourably? Not sure.   Music is, to them, over-rated, while drones Rake down.  Wake me before you drown-drown. My partner joined a LGBTQ Group at her investment bank to be inclusive;   Or rather, more inclusive. I felt a cold shoulder At the wheel of corporate ownership. I remain impossibly pre-facebook, queer, But never more bisexualist than Tiresias.   Money, m
Post a Comment
Read more

JAMES A. GEORGE ON THE NEW RIDLEY SCOTT FILM

- November 22, 2013
OUR CRITIC WONDERS HOW MUCH SEX AND DEATH IS GOOD FOR SCOTT A script written by one of the, if not the, best contemporary authors, Cormac McCarthy . Directed by Ridley Scott . A leading cast both A-list and prodigious: Michael Fassbender, Penelope Cruz, Javier Bardem and Brad Pitt . It seems like a sure winner, but alas the critics have been harsh. Perhaps rightly so, as The Counsellor is not the sum of it’s parts. But is it bad, or just odd? McCarthy’s familiar devices appear. The Counsellor, played by Fassbender, is our nameless protagonist who makes one bad decision from which seemingly unavoidable consequences entangle him and his loved one. The tragic fate characters run into isn’t played out on screen, thankfully for the sanctity of the viewer, but the absence of an identifiable face or avatar or symbol for the antagonists, visual or audible or whatever, voids of the film of a lot of potential tension. I think it may be a sign of a larger issue surrounding Scott’s more re
Post a Comment
Read more

EMILY BERRY WILL BE THE JUDGE

- November 22, 2013
Great news - the excellent British poet Emily Berry ( Dear Boy , Faber 2013) will be judging our third year of the Melita Hume Poetry Prize for the best debut (unpublished) poetry collection by a poet based in the UK, aged 35 or younger at the time of entry - minimum of 45 pages of poetry.  She follows judges for 2012 and 2013, Tim Dooley and Jon Stone . The Prize is a thousand pounds, and publication in May 2015 with Eyewear Publishing Ltd! Poets can enter as of January 1 up to the closing deadline of March 31st.  Winner to be announced in May, 2014.  We will have more details up soon, with the submission form.
Post a Comment
Read more

Fifty years since Lee Harvey Oswald did not act alone.  Fifty years since a book depository (had we ever used that term before?) ironically revealed the sword mightier than the pen.  Fifty years since the man with the umbrella, the troops standing down, the epileptic fit, the magic bullet, the three hobos, the manhunt, the swearing in on the plane.  Fifty years to create a new American myth - one never equalled - in terms of complexity, and paranoia. Fifty years since it became possible to imagine the mob, the FBI, and Castro in bed together. Fifty years since a few seconds of gunfire put a Texan in the White House.  Fifty years since JFK became LBJ . In my home town, there are schools and streets named after JFK.  My brother's initials are JFK ( Jordan Fraser Knowlton ) in honour of the fallen Irish Catholic president.  What was his legacy?  Publically, decorum, vigour, culture, a sense of Cold War hope.  In private?  Whoring, and ballot stuffing. Was JFK a great man?  He was
Post a Comment
Read more
More posts