Showing posts from December, 2006
Show All

Merry Christmas To All 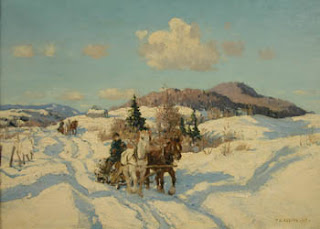 I would like to offer a very special Christmas poem to all my readers this year. It was written Christmas, 2005, which was the last I would spend with my father. We spent Christmas in Richmond, Quebec, at my grandparents' home, across the river from Melbourne. An Eastern Townships Christmas is about as idyllic as one can get. Snow is half-a-man deep, and the fir tree boughs are laden with it. Days we'd ski or walk in the woods, nights sit by a roaring fire, and read Robert Frost . This poem is set in this territory, which is where my mother grew up. I've found a most appropriate image, a painting set within a mile or less of where it was written (though a hundred years before) by Frederick Simpson Coburn , the painter and illustrator who was born in Melbourne, Quebec, before moving to study in Berlin and Paris. Curiously enough, he became an illustrator for some of the stories of Edgar Poe , in New York in the early 1900s, which perhaps also ties in with the slightly macabr
2 comments
Read more 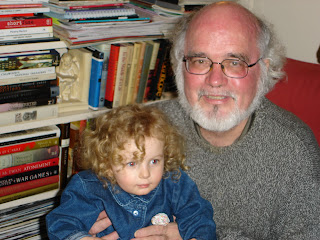 Each year I write a report to my friends, summing up the year that has been, and looking forward to the next. 2006 was the saddest year of my life, although in some other, lesser ways a good and important one. Three close family members as well as four friends died this year. Most significantly, my wonderful father, Thomas Edward Swift , died of brain cancer, on September 9, at the age of 66. I had spent weeks with him in hospital in Montreal. It has been a very difficult time, and I miss him so much (he is pictured here). His memorial service was very moving, and many friends and colleagues of his (and mine) attended, to celebrate the kind and exceptionally generous man he was. I am quite concerned for my mother, for the other two relations who died this year were her father and brother (my grand-father and uncle Ian and Edward Hume ). As well, my good friend, the poet Rob Allen , died of cancer, start of November. * In 2006 I turned 40. In the spring, I moved to Maida Vale with my w
2 comments
Read more 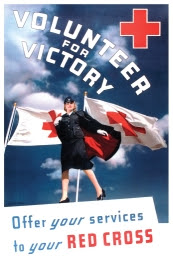 I know you are very busy this year bringing all kinds of electronic games to all the good boys and girls of the rich world, but if you have any time, could you send a red-nosed reindeer to help the International Red Cross in their campaign to ban cluster bombs. Those toys only hurt people don't they? Lots of people ask for peace, but from what I have seen, peace can't happen yet. So all I want this year is a few small things. Next year I'll ask you for a miracle, sincerely, Todd http://www.icrc.org/eng http://www.iht.com/articles/ap/2006/11/06/europe/EU_GEN_Red_Cross_Cluster_Bombs.php
Post a Comment
Read more

Tis The Season To Buy My Poetry Pamphlet 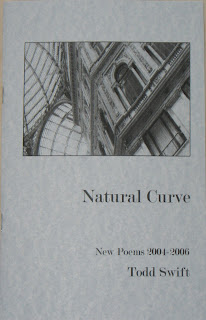 Crimbo is here. That's Christmas to those not currently based in the United Kingdom. Christmas is a time for giving and, especially, for ordering that hard-to-get rare (yet still in stock) poetry pamphlet. Say, Natural Curve . Order while supplies last! And support a poet. http://www.rubiconpress.org/chapbooks.htm
2 comments
Read more

No Time To Lose 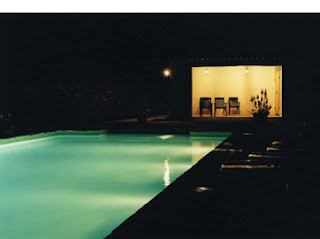 The Winter 2006/07 issue (volume 96:4) of Poetry Review , edited by poet Fiona Sampson , is now out, with the theme "A la recherche". North American (and other non-UK) readers wishing to follow the contemporary poetry world as it unfolds on these isles should subscribe to PR - it is, to paraphrase Ms. Turner, simply the best. That being said, I am honoured to have a review published in this issue, on the new collection by Paul Farley , Tramp in Flames . Other contributors include Michael Longley (specially featured), Eavan Boland, John Fuller, Ruth Padel, Alan Brownjohn, Jackie Kay, Glyn Maxwell, Jay Parini, Patrick Crotty and Frank Dullaghan . Order from www.poetrysociety.org.uk
Post a Comment
Read more 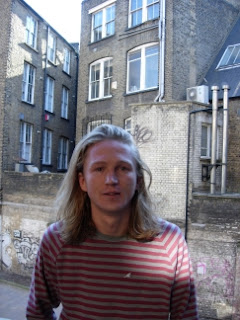 Eyewear is very glad to welcome rising literary star Joe Dunthorne (pictured) to these pages, especially as the holiday season approaches, for now is a good time to be festive and celebrate this exciting writer's work. Dunthorne, who graduated from the Creative Writing MA at the University of East Anglia the same year as me, is both a fine prose writer and poet. At UEA he did the Prose strand and was awarded the Curtis Brown prize. In 2005, Dunthorne traveled to Bangladesh with the British Council as part of an exchange project with young Bangladeshi writers. His poetry has been published in magazines and featured on Channel 4 in the UK. His novel, Submarine , is forthcoming from Hamish Hamilton in early 2008. Eating Out There are dumpsters simply brimming with left overs and send backs, black sacks full of nummy slop: coconut pannacotta truffle honey mozzarella California bouillabaisse and even if you mush the food together I’ll bet it still tastes pretty good but then, you see
1 comment
Read more 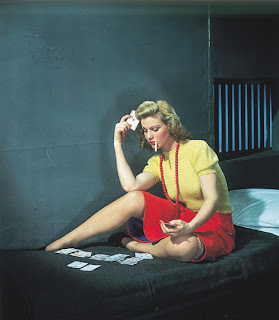 If you have any time alone this holiday season, Eyewear offers something more than coal in your stocking and suggests nth position's bag of poetic goodies for this Yule... Light from the inside out, The sky of many acres & Simple soliloquies by Elizabeth Kirschner Postnatal ward, Holles Street & Grogan's Bar by Dave Lordan Aporia & Inevitabilities by Len Sousa On tiles, All perfectly abandoned, About your parrot & A driving student restarts the car by Arlene Ang In bed, Aquarium & Ungaretti's Christmas blues by Rufo Quintavalle Shoe gazing & Going into the yellow by Tim Liardet To my father & my lover by Marlene Rosen When evening drowning by Carol Jenkins A song about a stranger by Ryk Mcintyre Letter from America & Anticipation by Wayne Smith
Post a Comment
Read more

Beloved authors Jeanette Winterson and Ali Smith (both pictured) read last night at the Oxfam Bloomsbury shop - December 14, 2006. I hosted. Around 70 people were in attendance, filling the intimate shop. Wine and mince pies were served. The writers were captivating, giving, full of fun, each reading two Christmas stories they'd written - in one instance, Smith giving her new story to Winterson as a gift. Winterson read half a story from a power book. Sitting atop the Oxfam counter, legs dangling. It was the first time the friends had read together. The audience was deeply appreciative and the entire event seemed dusted with joy. Oxfam raised approximately £1,000 on the night for those in need.
2 comments
Read more 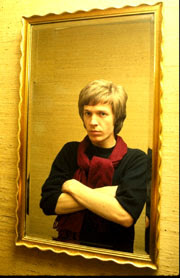 Eyewear is not immune to the worthless desire to tell total strangers what the best of the year (in any number of categories) was, and has one advantage in not trying to sell anything (well, except perhaps for some poetry from time to time) - so, 'tis the season to launch the lists. Today, we shall have naming of albums - the top popular music that, while maybe not the best, most tickled the fancy of mine ears (and so on); all albums listed have been reviewed here previously, except for the first place winner, and all quotes are from Eyewear reviews: 1. Ys by Joanna Newsom Newsom's masterwork has the advantage of being produced in consort with Steve Albini and Van Dyke Parks but it sounds more like Walt Disney teamed up with Bernard Hermann - the enchanting, off-kilter harp and string arrangements do what is so often promised but rarely delivered - transport. The listener of this album is taken in hand to a different world, one vastly more imaginative and whimsical. Spelunkin
Post a Comment
Read more

- December 14, 2006
Who says there isn't any good news? Like something out of a Chinese fairytale, the world's tallest man has used his world's longest arms to save two dolphins... wonderful. http://news.bbc.co.uk/1/hi/world/asia-pacific/6178659.stm
Post a Comment
Read more 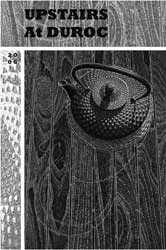 Upstairs at Duroc is one of the best English-language literary magazines to come out of France. Its editor in chief is Barbara Beck , herself a good poet. It's a publication of WICE, based at 20, Boulevard du Montparnasse, 75015 Paris. Issue 8, 2006, is now out, looks great, and features poets such as Mark Leech, Rufo Quintavalle, Lisa Robertson, Mark Terrill and Cecilia Woloch . I'm also in it. To order copies, send a French cheque for 11 Euros to the address above, payable to WICE. If you would like to see more details about the magazine, have a look here: http://www.wice-paris.org/courses/creative/upstairs-duroc.html Deadline for submissions for the next issue is 31 January 2007. More details here: http://www.wice-paris.org/courses/creative/submit.html
Post a Comment
Read more

John Welch is a good, complex, sometimes very moving and thoughtful poet whose work deserves attention. He is very welcome at Eyewear this Friday. I include a brief biographical note below: As well as editing an anthology, Stories from South Asia (OUP 1988), Welch has contributed articles to Poets on writing (Macmillan 1992) and more recently to journals including the London Review of Books , fragmente and Scintilla . A new poetry collection is The Eastern Boroughs (Shearsman Books). I included a poem of his on the Oxfam audio CD Life Lines , released this summer. Approaching Constable's Painting "Weymouth Sands" It's these spaces you are beginning to find Opening up behind you, these gaps in memory, Bits that fly out of your head like birds And then disappear as if overwhelmed by sky. The sensation is not altogether unpleasing. This trying to remember, will it feel more and more Like reconstructing an accident, As if you had been living in its aftershock? T
Post a Comment
Read more 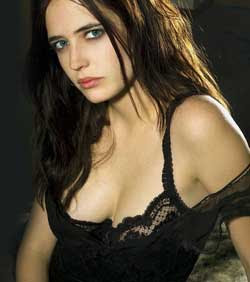 Eyewear was wrong to carp. The new James Bond film, number 21, Casino Royale , is the best in the series since Sean Connery tossed his to Miss Moneypenny for the last time. [Spoiler alert] First, let it be admitted that the Bond films are not precisely works of moral genius. Paul Virilio would no doubt argue they instead form part of the continuum in art and science that, in the 20th century, saw a "pitiless art" destroy the human form, if not the very idea of the humane (and so the scene in Miami, set among the plasticized skeletons of that bizarre recent exhibition is entirely apt). Indeed, what is James Bond if not the avatar of a pitiless man, arrogantly prepared to take life ("00") with an ice-cool modern instrumentality for a heart? This is where the new film ricochets off the genre canon established in the first 20 features. By taking this very issue to heart, we are presented with something very much like the origin of Darth Vader that was seen in the Sta
1 comment
Read more

- December 04, 2006
The Guardian finally chooses to write about Canada and Canadian politics, and ends up mentioning our former PM, Brian [sic] Martin. Hilarious, and a little sad: http://www.guardian.co.uk/leaders/story/0,,1963076,00.html Meanwhile, the good news - Dion not Ignatieff as Liberal Party leader. Dr. Ignatieff was hubristic, seemingly pro-Iraq war and generally out of touch with Canadian sentiment. Dr. Dion is French-Canadian, an expert in intergovernmental affairs, passionate about unity, and interested in environmental issues. He's the right leader at this time. http://www.theglobeandmail.ca/servlet/story/RTGAM.20061204.wlibsvote04/BNStory/National
Post a Comment
Read more

Eyewear is very proud to showcase a poem by the great Anne Waldman (pictured) this first day of December, 2006. Ms. Waldman - poet, editor, performer, professor, curator, cultural activist- carries in her genetics the lineages of the New American Poetry, and is a considered an inheritor of the Beat ( Allen Ginsberg called her his "spiritual wife") and New York School ( Frank O'Hara told her to "work for inspiration, not money") mantles. Directing the Poetry Project at St Mark's Poetry Project over a decade, she co-founded the Jack Keroauc School of Disembodied Poetics with Allen Ginsberg at the Buddhist-inspired Naropa University in 1974. She is a Distinguished Professor and Chair of Naropa's celebrated Summer Writing Program and is working with the Study Abroad on the Bowery project in Manhattan's Lower East Side. Author and editor of over 40 books and small press editons of poetry, some of her latest books inlcude In The Room Of Never Grie
3 comments
Read more
More posts