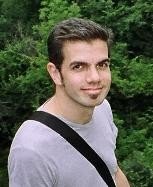 Boyd studied at Brock University and graduated with a BA in English. In 2000 he moved to live in Scotland, but now lives and works in Toronto again. While writing, he has worked for Chapters, the City of Toronto, the National Ballet and the federal government.

He is the author of poems, fiction, reviews and essays, and has had work published in magazines and newspapers such as Taddle Creek, Books in Canada, The Globe and Mail, Quill and Quire and on various sites such as The Danforth Review.

In May of 2003 he inherited the well-regarded (and some would say infamous) IV lounge reading series from poet Paul Vermeersch, and as a result is currently booking and hosting the series. Boyd is a member of Greenpeace and PEN Canada.

He is a founder editor of the new online journal, Northern Poetry Review (see Links) which I recommend, even in its infancy.

When he stumbles in the trench
his hands cut into mud like dough.
Surrounded by puddles, rats, lice.

Helping carry wounded along wooden
planks because the mud is deep
enough to swallow a man,
he pictures it baked in the sun, hard.

He skips, sometimes, around shell
casings, oven hot and tumbling
from the back of a spent gun.

Under the familiar whistle of
falling bombs that softened
and pounded earth, he slept,
while explosions sliced at the edges
of his dreams: the song of chimes
above the door, the smell of fresh bread,
a Chelsea bun with icing dropped
into a paper bag and handed
over the counter.

poem by Alex Boyd
first published in the pamphlet Brick and Bone, available at www.alexboyd.com