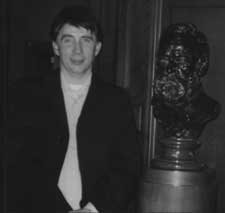 Higgins is one of the best Irish poets currently writing, under the age of 40 (he still qualifies) - for reasons that are starkly plain to the eye and ear when one opens his debut Salmon collection, which has sold very well indeed over the past year.

No one else in Ireland, in the race to outdo Heaney or Muldoon, has thought to reconsider Patrick Kavanagh's path - that is, the jaded, satirical voice of the countryman faced with city realities.

Moreover, Higgins writes with something of the satirical savagery of a Yeats (himself wrestling with Swift's vicious if ghostly tongue) - but, and here's the showstopper - he does so in a style all his own. In an age when most poets would arm wrestle over a scorpion to get their own signature voice, Higgins just has it.

It isn't always the prettiest singing voice, but it gets the job done, and well. Once you've read Higgins, you actually know what Ireland in the 21st century is like - you know how globalisation has altered Galway life - and you know what an ordinary Irish man, with uncommon poetic gifts, feels and thinks about life, love, family, history, and the future. And you also laugh. Few Irish poets have ever been as funny as Higgins.

If Higgins keeps to it, sticks to his guns, and publishes another two or so books in the next decade, by the time he is 50, he'll be exactly where any poet would want to be - in the unforgettable zone.

In the meantime, let's cheer him on, as he enters the last lap of his 30s, on the cusp of the 40s where all sorts of wonderful poetic challenges still await.
Email Post