Showing posts from February, 2006
Show All 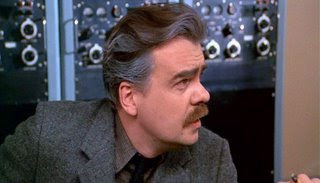 Spielberg'sMunich isn't as good as some claim, but it is still a very good film. Rather than read the film in terms of its "deep message" I want to refer to its surface pleasures, in this instance, its visual texture, which, in terms of mise-en-scene, film stock, and lighting, evokes classic early 70s police procedural dramas, like Fred Zinneman's late masterpiece, The Day Of The Jackal.

Spielberg would have many reasons for wanting to pay homage to this director, not least because he made the liberal classic High Noon, which, in terms of burying political comment beneath a Hollywood-genre form, prefigures much of Spielberg's own recent filmography.

The Jackal - arguably the greatest assassination thriller ever made (a riveting sub-genre including The Manchurian Candidate, The Dead Zone, and In The Line of Fire) - features the wonderful sad-faced French actor Michael Lonsdale (also known for being Drax in Bond) as the ever-determined flic Lebel (pictured here)…
Post a comment
Read more

Ingratitude, or The Attitude of Ingrates, or Greatness? 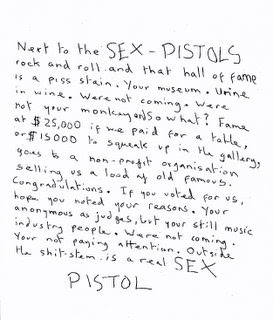 Poet Lisa King, a member of the 1993 National Championship Slam Team and an individual Boston Slam Champion has passed away at her home in Sommerville, MA. She was 45 and will be sadly missed. The performance poetry community is in shock.

The initial report was that she had died from heart failure sometime over the course of the recent blizzard in the Northeast (USA). Lisa had also been coping with a debilitating back injury for several years.
Post a comment
Read more 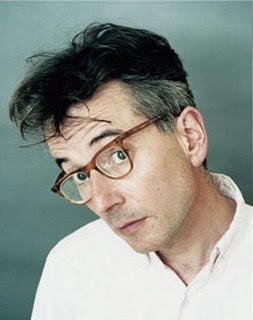 On Friday, February 24, the largest single gathering of famous and popular British and Irish poets for one recording session occured - with readings for an Oxfam CD, and a Talking Book for the blind. The event was conceived and planned by me, with the support of Martin Penny and Su Lycett of Oxfam, and help on the day from New York writer Thaddeus Rutkowski.

The assembled poets agreed it was the most impressive single gathering of poets in one room for a recording in British poetry's history.

Third Anniversary of 100 Poets Against The War 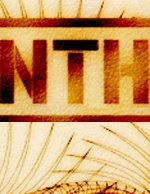 It was on February 24, 2003, that Salt (Cambridge, UK) published the printed version of Nthposition's oft-imitated, never-bettered "100 Poets Against The War" series of electronic anthologies - making it the fastest ever poetry book, in terms of conception, to writing, to editing, to publishing (less than a month). It was described as "the 21st century's most controversial and talked about e-book".

Val Stevenson's www.nthposition.com pioneered the use of the Internet for copy-left publishing, and political activism, and the whole world took notice, with The Times reporting 250,000 downloads of our e-books in 3 weeks alone. The Guardian described it as "a remarkable anthology" and The Times said it was "a new lease of life for protest poetry".

The books are still available for download at Nthposition, or at www.amazon.com from Salt. 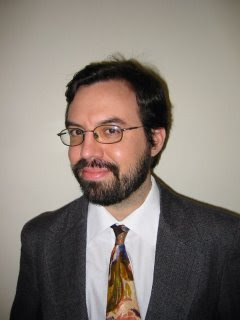 So my anagram wasn't very good.

But this electronic book, The Holy Tango of Literature, by Francis Heaney, who may be pictured here to the right (unless this is someone else with the same name) now making its way across the Internet, just may revive interest in poetry, and linguistic wit.

It is certainly, to my mind, the most brilliant light verse written by an American since Ogden Nash.

The link is here: http://www.yarnivore.com/francis/Holy_Tango.htm

The idea is simple, take an anagram of a poet or playwright's name, and turn it in to the title of a work they never wrote, and then write one in their style. In terms of constraints and wordplay-complexity, it renders all former forms of literary spoof tame dull stuff.

For instance, Heaney gives us:

Call the roll for the majority whip,
The wispy one, and bid him vote
On autumn leaves' numismatic worth.
Let committees dawdle in the glen
As they are wont to do, and let their aides
Weave flowers through bro…
Post a comment
Read more 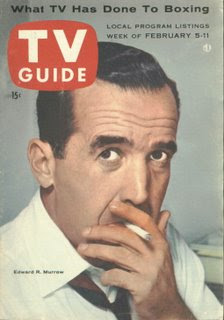 1. I finally get the X-Files inversion with "The Smoking Man" - since Murrow was the original anti-conspiratorial government chain-smoking good guy.

2. Many of the scenes pay gentle homage to Kane. Especially the scene where Murrow types his "Shakesperean" riposte to McCarthy, which mirrors the Jedidiah is too drunk to write a glowing review scene.

3. How old is Frank Langella? He is superb at this stage of his careeer.

4. Murrow's tragedy is reflected in his smoking. Just as the man at the heart of TV condemns its cancerous corruption by tocix corporate control, he chain-smokes the Kents he peddles to stay on the (polluted) air. His insight, that TV is just wires and lights without ethics and social concern, fails to get to the heart of the problem: TV is just a delivery system for commodities and commodification. Murrow, who knew what communism was and avoided it…
Post a comment
Read more 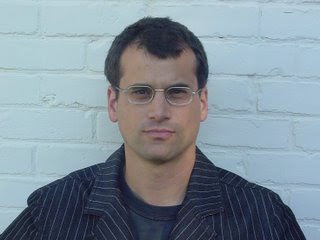 Eyewear welcomes fellow-Montreal-born Andrew Steinmetz to its glossy pages this Friday, especially as his poem furthers our "barber" theme from last week's feature (and also happily echoes the conceit of an early poem of mine).

Steinmetz was born in Montreal in 1965. He is the author of a memoir, Wardlife: The Apprenticeship of a Young Writer as a Hospital Clerk (Véhicule Press, 1999) and two collections of poetry, Histories (Signal Editions, Véhicule Press, 2001) and Hurt Thyself (McGill-Queen's University Press, 2005).

As a singer-songwriter, he performed and recorded with Weather Permitting and Good Cookies, two indie rock bands.

Presently he is the editor of Esplanade Books, the fiction imprint at Véh…
Post a comment
Read more

The Eva That Is Done Under The Sun 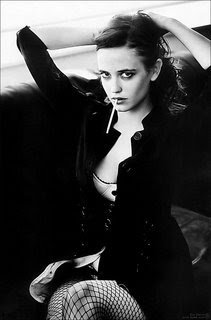 The James Bond franchise seems to have finally got their act together. They've done what they used to do so well: talent scout on the continent for lesser-known, compelling character actors with magnificent faces and sterling resumes.

After scurrying to try and cast leading ladies like Mulholland-to-Kong starlet du jourNaomi Watts (on the QT, a favoured figure at Eyewear), they have snatched up perhaps the best of all possible Bond Girls (following on from the Essais de Théodicée sur la bonté de Dieu, la liberté de l'homme et l'origine du mal ) - French stunner Eva Green, pictured here, known for slightly-implausible Bertolucci flick The Dreamers and ill-attended (though good) Kingdom of Heaven actioner where she was ravishing in Jerusalem. Green will play Vesper Lynd, to craggy Daniel Craig's jury's-still-out Bond.

Meanhwile, they dumped their Bollywood villain to go with one of Euro-cinema's most-respected young thesps, the typographically-challenged great Dan…
Post a comment
Read more 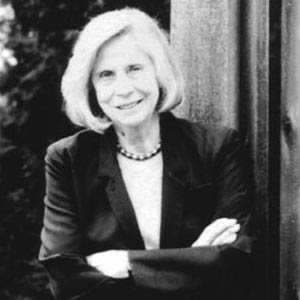 Sad news. One of America's significant poets of the last century has died.

For more information on her life, see the link below, and also Jacket. 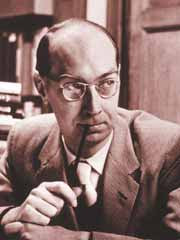 Philip Larkin, pictured above, one of England's greatest poets since Hardy, and arguably, after Empson, the least in terms of actual output, has come back from the grave - just in time for a new ban (this time not on Lady Chatterley but cigarettes in pubs) - in the form of voice recordings found in a desolate attic. I have an image of someone bursting in.

At any rate, this is jolly good news, and I can't wait to hear them. I have always had a Larkin fetish (I say fetish because it is slightly seedy to adore Larkin's work as much as I do. I like the fact he published collections spaced about a decade apart - '45, '55, '64, '74, and each one of them was arguably the most exciting book of their decade).

I'll have to figure out a way to get one for Oxfam, too, come to think of it...

In the meantime, here's the article from The Telegraph: 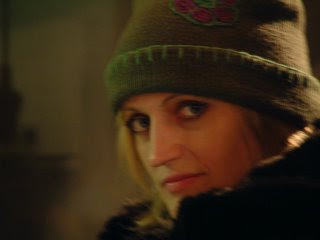 Eyewear has always liked barbers, with their scissors and brio. But not just the kind from Seville. Some of the best are poets (see "Albanese Barber Shop"). Therefore, it is a pleasure to welcome Ros Barber (see photo) this Friday.

Her first collection of poetry, How Things Are On Thursday (Anvil) was hailed as "beautifully crafted" (Orbis) and "an enjoyable and satisfying read" (The North). Ian McMillan, of Radio 3's The Verb, recently dubbed her "the Poet Laureate of the South Coast".

She has been poet in residence in Herne Bay, on the Isle of Sheppey, in a dilapidated block of flats, at a barber shop, and at Arts Council England. Having also published "Not the Usual Grasses Singing" from her Sheppey residency, she is …
Post a comment
Read more

In Praise Of Older Movies 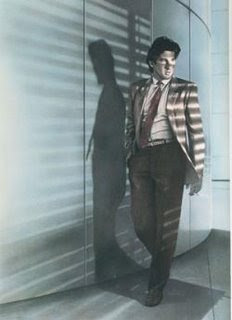 American Gigolo, directed by Paul Schrader, who had earlier written the screenplay for seminal 70s film, Taxi Driver, initiates the 80s, and, 26 years later, looks (and screens) better than ever. With a hyper-cool Moroder/ Blondie soundtrack, Armani fashion, Scarfiotti's lush design (he'd done Last Tango In Paris) and the best-looking actors of the era (Gere and Hutton) it is a lost or at least undervalued classic.

I'd argue several things to contextualize the film, and reassert its value as more than pop culture curio, or naff guilty pleasure:

1. Schrader's script brilliantly (and clearly) inverts Dostoyevsky'sCrime and Punishment, to explore his central characters (a whore, a nihilistic rich person, a detective) and discuss ideas of overcoming morality, admitting sin (or "kink" as it is called here) or ultimately accepting grace, forgiveness, love;

2. The mise-en-scene mirrors and revises both the film noir aesthetic (now in lurid neon greens and pinks and…
Post a comment
Read more 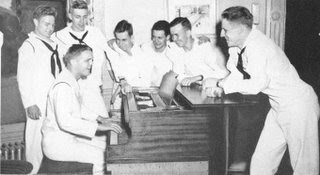 approximately this
by rob mclennan

Rattled, Storage & It was a wedding of strangers previously
by Jennifer K Dick

Knowing woods & For my sister
by Rodney Nelson 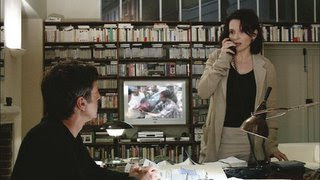 Hidden (Cache) by Haneke, is a great film.

However, in this time of great debate - conflict - between West and Islam, over visual depiction, the film takes on a sombre, further reflective surface, a layer, as its forensic examination of the idea of what is an image, what a memory, and what a history - in terms of pain, regret, and finally, repressed desire - is further determined by the political mistreatment of Algerians at the hands of not just French police, or policy, but French society as a whole.

Hidden is very much what would happen if Alfred met Edward (Hitch and Said) - a hybrid genre-piece that plays with voyeurism and visual dread, as much as with the idea of the orientalized other - indeed, terror here is figured explicitly as the other (not fear of the other, but the other itself, just as, for Sartre, hell was other people).

Seeing is terror, then - and so is being seen, observed. Therefore, the most shocking scenes of violence, of violation, which occur in this hyper-real f…
Post a comment
Read more

End Of An Era 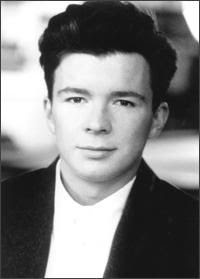 Smash Hits is no more.

The greatest pop music mag for teens ever, and the one that introduced me to handsome crooner Rick Astley (see above) - a perennial favourite guilty pleasure - has ceased printing.

It'll reappear online, in a new form more friendly to a digital age. Never gonna give you up... not true, today. 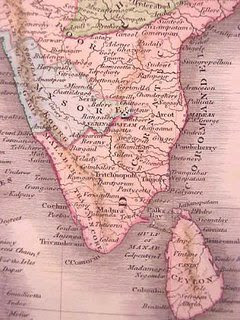 1828 - In India, aged 46, Lieut-Colonel William Dickson, commanding the 7th regiment of Bengal Cavalry at Kernaul in the Upper Provinces.

This gentleman was the eldest son of the late Thomas Dickson, esq. of Southampton and by his mother descended from Col. Gardiner, who was killed at the head of his regiment at Preston Pans in 1745 and whose "Confessions" are well known.

Col. Dickson entered the Army of the East Indies in 1802; he was particularly noticed by General Lake in the general orders of 24 Oct, 1804, for his gallant conduct at the seige of Delhi where he was present as a Lieutenant in the 2nd battle of the 14th regiment, as well as on other occassions; and he was twice severely wounded.

For several years afterwards, the management of one of the principal stud departments was entrusted to his superintendence. His merits as a cavalry officer were well known and appreciated by the government; and a very few months …
1 comment
Read more
More posts