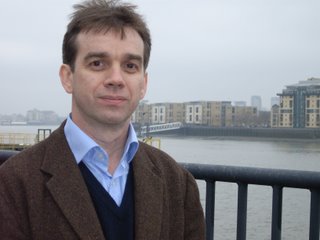 I'm very glad to welcome Dominic McLoughlin to the Friday Poem feature here at Eyewear, especially at a time when he has had such recent good news: having a poem place second in the very competitive National Poetry Competition 2005 (UK). To read that poem, go here:

His poems have appeared in the anthology Entering the Tapestry edited by Mimi Khalvati and Graham Fawcett (Enitharmon, 2003), and in magazines including The Rialto, The Shop (from which the poem below is taken) and The Oxford Magazine, and at nthposition. He lives in London, England.

What am I bid for the crocked, the broken-backed
the well-past-its-sell-by-date, the tear-stained and pain-wracked?
Who’ll give me a starting price
on this lonely parcel that meant something once?

I, for one will bid you the moon and the stars and the sun.
I’ll give heaven and earth and all I am worth,
God and the angels, looney tunes,
all the half-remembered lyrics from my youth.

Well if nobody else in the room is bidding
this gentleman seems to have covered the floor
with collateral that sounds awfully impressive
though it can’t be strictly accounted for.

And for those who’re wondering
if they should have waved their paddle
let me just re-cap on the kind of twaddle
this lot is described as having become.

It’s useless, incompetent, gauche
on a losing streak, up to no good, humourless, weak.
Amongst its many faults is a fatal flaw
it doesn’t think it deserves to be valued anymore.

What am I bid? The moon! What do I hear? The sun!
Your last chance to speak. I’ll give you everything! Going, going,
gone.