Showing posts from June, 2005
Show All

- June 29, 2005
Last night's Oxfam poetry benefit reading for Oxfam Unwrapped was a great success. I hosted the evening (and read three poems), and we had about 90-100 people in the shop. The poets were uniformly superb (okay some were very good and a few were excellent but I'm not telling) and in true pathetic fallacy mode, the London heat was broken by violent thunder and lightning - especially during Jamie McKendrick's and Alan Brownjohn's sets - and rain - which drummed on the large (and slightly open) skylight. Afterwards, Alan Brownjohn, Eric Ormsby , Robyn Sarah , Patrick Chapman and other fellow poets ( Leah Fritz and Alana Pryce for instance) and family and friends went out for wine and crepes, and we had a great and boisterous chat. Alan Brownjohn told me much about the legendary The Group - perhaps the key poetry workshop of the 20th century - led by Philip Hobsbaum , and which produced, among others, Peter Porter , Peter Redgrove , and Seamus Heaney - as well as Alan
1 comment
Read more

- June 28, 2005
Blogs bring out the egotist in people, almost by definition. Time to bring out The Argotist . The link's where you'd think it'd be. They're becoming an increasingly interesting place to find interviews with poets, critics and editors of note: Charles Bernstein , Marjorie Perloff , and yours truly, among others. Also, some good poetry can be located there, including by Mr. Waling , whose blog is noted elsewhere at this one.
Post a Comment
Read more

Mirror In The Bathroom 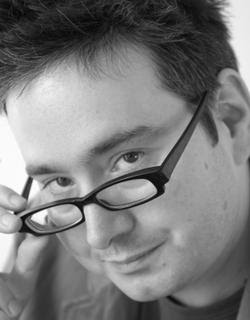 Poet and photographer Derek Adams recently took photos for his forthcoming exhibition of poets based in the UK. Here's an example of his work. The fellow in the photograph is me.
Post a Comment
Read more

- June 27, 2005
I am back from the silver anniversary of the Annual Writers Conference, in Winchester, the brainchild of Barbara Large . From humbler beginnings, it has developed into a major gathering of (mainly commercial) writers, from thriller and romance novelists, to top literary agents, non-fiction types, and even some poets. She is to be congratulated on a marvelous occasion. I was honoured to be at the head table for the dinner on Saturday evening, and was asked to read a few poems to the gathering, which I did. I failed to use the mic to my advantage - I have a tendency to want to swallow it. Still, I think I mostly got the poems across to the somewhat bemused gathering. One of the poems I read is the "American Found Poem" also at this site. One of my dinner companions was a noted geneticist who confessed to having a secret passion for raunchy limericks. He recited some of them to me over our salad. One of the best parts of the day - for me - was the so-called "One-to-Ones&q
Post a Comment
Read more

- June 23, 2005
Another very hot day in London. Tony Blair tongue-lashing the EU with his brand of "British pragmatism" (would that be common-sensical Newton, Hobbes, Smith, Locke, Pope and Hume vs. irrational Brahe, Rousseau, Rimbaud, Marx, Freud, and Derrida, by any chance?) - and Tim Henman (sadly if predictably) being knocked out of Wimbledon in the second round. Henmania in 05 is not what Beatlemania was in 65, to be sure. Speaking of being on the ropes - delight of authors everywhere - a good review arrived in the post today, which I read over tea in the shade. It is for my latest collection of poems, Rue du Regard (sometimes mis-spelled , or is that mis-spelt as Rue de Regarde ); if you google the title you'll discover it is a famous little street in Paris on which lived prime minsters and a psychoanalyst. The review is in Ropes , issue 13, sub-titled untwined : a fine-looking Creative Writing Grad Student production out of Ireland, with an Introduction by Patrick McCabe (
Post a Comment
Read more

- June 22, 2005
The vaguely muggy, quite hot weather continues here today in London. 83% of people polled in Britain believe in global warming, and they have reason to. This Saturday, June 25, I have the honour of being "Poet At Large" at one of the largest writers' festivals in the UK. To be precise, The 25th Annual Writers' Conference, Bookfair & Workshops at University College Winchester. Hope to see you there. I'll be chairing some panels, reading a few poems at the conference dinner, and, perhaps most importantly, filling in for U.A Fanthorpe , who was unable to hold her one-to-one poetry workshops. Terribly big shoes to fill, since Fanthorpe is one of the most beloved and best known of English poets. I'll do my best.
Post a Comment
Read more

The Case For Colin Wilson 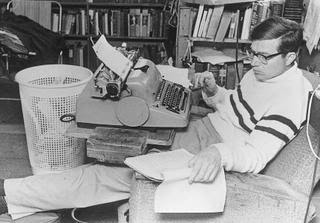 Today is the summer solstice, and this morning's BBC news broadcast (on Radio 4) informed us that the Druids at Stonehenge might be on strike; meanwhile, ambulance times are getting faster in the UK - allegedly due to time-fixing: 400 cases last year arrived before the emergency call was put through. Philip K Dick territory, surely. As you no doubt know, I am the poetry editor of Nthposition.com - and from time to time I also write reviews for Nth. This June sees my review of Colin Wilson's latest autobiography (he wrote one years ago in about three days), which is very good. I have recently been in email correspondence with Colin Wilson (legendary author of The Outsider pictured above), and he is very witty and open. Long may he continue to think and write.
1 comment
Read more 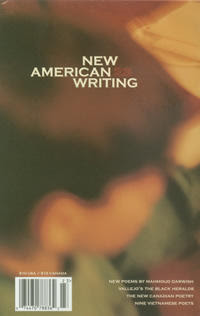 Today might be described as the first hot, sunny day of the summer here in London. This while all hell breaks loose over Britain's intransigence regarding the EU budget. It is odd to live in a country that, while nominally in Europe, sees its weather map halt at the English Channel. Today's post brought the new issue (23) of New American Writing , edited and published by Paul Hoover and Maxine Chernoff . I was a special guest editor of a section of this issue, called "The New Canadian poetry" which represents 20 younger poets born between 1960-1980. I'll try and write more about that a later time. The issue includes much else besides, and has a very cool cover - based on a found photograph, artist unknown - out of focus but the colours are sympathetic to the eye. I'm looking forward to sitting down with a cup of tea and reading over the complete NAW sometime soon.
Post a Comment
Read more

I travelled to and from Manchester today - two and a half hours each way - for a 20 minute poetry reading - on Virgin's semi-fast tilting trains. Nauseating at any speed, so no reading. At one station, the conductor came on to announce: DO NOT PANIC, THE DOORS ARE BROKEN, DO NOT PANIC. Everyone looked glum. Before the reading - which was at the monumental Central Library (built in 1935 and very much like some lovely retro edifice from Brazil the movie) - I went to the Library Theatre for tea and a cheese and pickle sandwich, a very English thing to do, I suspect. Hundreds of sexy posters of a nubile bespectacled 19-year-old "librarian" gazed down at me, with the words: LARKIN WITH WOMEN underneath - the new play celebrating bachelor PL's wandering eye and weakness for women in the stacks. I love all things Larkin , so that was a treat. The reading room itself was small, but wood-panelled. The organiser (who was very kind and hospitable) made the fatal error - as
Post a Comment
Read more

- June 16, 2005
For those poetry-intrigued people in the Manchester (UK) area, please note that myself and the fine poet John Siddique will be reading Friday, June 17, 2005, at Manchester Central Library starting at 1pm. This'll be my first time in Manchester, despite a long-time interest in some of the great bands that have hailed from there.
Post a Comment
Read more

The Ministry of Emergency Situations

- June 01, 2005
The Ministry of Emergency Situations After an emergency situation All wedding rings must be removed And citizens will be asked to undress In the streets. The Minister herself Will bathe those affected with disinfectant Foam. They must ensure their eyes Are shut. Those who refuse to take off Their jewelry, tokens of affection, clothes, Will be shot. The fully naked will dance In the medical shower, then be x-rayed And scanned by robot magnets small as Mites. The dead will rot where they fall. The Minister’s minions will run things; Inspections will go on. The cleansed Victims will be allowed to request Compensation for their torn rags, Their melted trinkets, irradiated keepsakes. The Ministry of Songs will form a choir, And douse them in anthems on liberty. by Todd Swift
Post a Comment
Read more