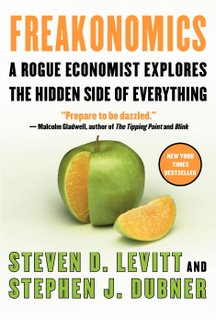 The economist Steven D. Levitt, with help from journalist J. Dubner, has helped to create a flashy new form of economics - one with little recourse to theory or even reference to money - but with an emphasis on incentives, and evaluating statistics to determine new ways of looking at curious relationships - inventing new quirky questions - hence, why do Sumo Wrestlers cheat, etc...

Well, their book Freakonomics is good for a flight, and quite imaginative and witty - though it tends to pad things out with repetition and potted histories (say of lynching) that, in the context, appear a bit tacky.

It introduces, however, a new field of econo-aesthetic study, Poetry Freakonomics, or, rather, Freakopoetics.

This is the first in an occasional series of Freakopoetic questions. Answers optional.

Q: HOW IS THAT 156 POETS CAN APPEAR IN AN ANTHOLOGY, AND THE BOOK ONLY SELL 12 COPIES?

In other terms, this is called THE LAW OF NEGATIVE POETRY SALES, which says that, for every poet included in a poety anthology or magazine, assume zero or minus sales. The reason? Poets do not understand the concept of shared incentive.

For instance, let us assume that 156 poets were included in an anthology - let us call it Anthology P.

If each poet - perhaps through viral marketing - encouraged friends, family, themselves - to purchase said P - let us say x 100 - sales of the book would be a staggering (for poetry) 15,600 units. This would mean each poet included in the book would be included in one of the best-selling and most widely-owned and distributed collection of the year - a good credit.

However, usually, poets manage to drum up few if any sales, so sales usually come in at 12 - less than the number of contributors, and the book sinks like a stone.

Perhaps this is a failure of nerve?

Or perhaps poets, like cats and other famously selfish and arrogant creatures that enjoy licking their derrieres, simply do not enjoy lifting a finger / paw to assist in the promotion of a work when others can do it for them?

Perhaps, following the logic of Freakopoetics - a new incentive should be offered - one modelled on taxation. In this model, unless Poet Q sells 100 units of Anthology P, they will be fined, to the tune of $1.00 per book not sold...