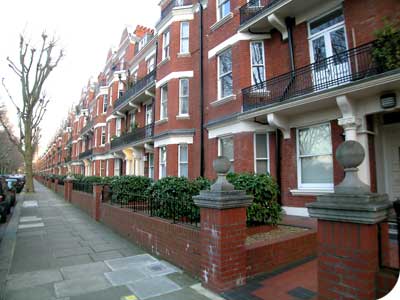 Sad news.  William (Bill) Lloyd has died.  Bill was the Porter, for the past 18 years, of the Leith Mansion Blocks in Maida Vale - a job he took on in retirement.  He was in his 80s, but hard-working and fit.  As a younger man he'd been a gymnast and fitness trainer with the British Army (SAS), then a professional footballer with Luton, so he retained that sense of physical confidence.  Bill was friendly and liked a drink in his beloved sports club down the road.  He had met his partner (20 years his junior) in his late 50s, at a pub, and they instantly connected, as both loved sports.  He enjoyed spending time in Greece, when not on the job.

Bill was an exceptionally dedicated and professional porter, from the old school where politeness and excellence mattered.  He was known to everyone on the street, and in the many flats he looked over.  He made sure that everything was ship-shape, and he didn't tolerate mess, clutter, or too much noise.  He was fiercely proud of Mansions, and their quality and traditions.  He liked to say there had only been two break ins in his whole time on his watch.  Bill and I spoke most days.  He'd stand out on the street, outside his office, greeting deliverymen, post persons, and residents.  He liked to keep an eye on the neighbourhood.  He was serious, but with a wry streak.

He was concerned about people, about the future, and has recently expressed concern about the way the weather was getting bad, in Australia, and elsewhere.  I feel bad now, but I said to him "neither of us will be around to see the worst of it".  I didn't mean to mention mortality, because I thought of him as strong, and immortal.  Bill means a lot to me mainly for one reason - when my wife and I first came to look at our flat, four years or so ago, almost five now, he came out to greet us, and welcome us to the street.  He said we'd love it here - which we do.  His welcome made our decision to move in more secure.  Over these years he was always there, helpful, diligent, and solid as hell.  I'll miss him a great deal.  I am so sorry he has died.  A part of what is best about Wales (where he was born) has died with him.
Email Post
Labels: death England

Sorry to hear about Bill. May he rest in peace! Are you going to the funeral?

Poetry of the Day said…
oh this is tragic news