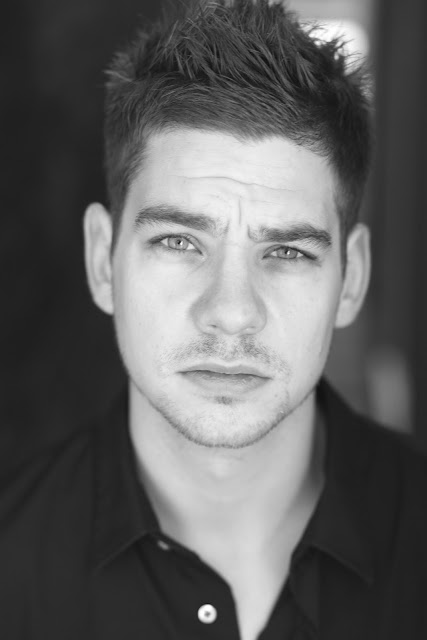 Eyewear is very glad to welcome a namesake to these pages this blustery London Friday, the British performance poet Todd Von Joel, pictured.  Von Joel's background is noteworthy: by nineteen he had been expelled from school, thrown out of home and spent time in prison.  An angry young man, Von Joel was lost - heavily involved in the underground London graffiti scene, where drink, drugs and violence were a way of life. His reputation as a graffiti writer rivalled his rep as an MC of talent.  Prominent on the London party circuit, he performed at numerous events and for a short time ran a south London-based pirate radio station.
Things have changed.  In his late 20s now, Von Joel has graduated with a First Class BA Hons degree in Creative Writing & Drama from Kingston University; this is where I met him, as a lecturer - he was in a creative writing class of mine.  Since graduating, he has been signed by Jam Agency and is now pursuing both his acting and writing career in a professional capacity. Von Joel fights competitively as a kick boxer, currently unbeaten.  He is also a keen footballer who plays regularly for his Sunday team.
This young man seems destined for some kind of greatness.  Both rough and elegant, streetwise and sensitive, smart and tough, kind and strong, his charisma and decency shone through in the classes I taught him in.  Strikingly handsome, tall, and articulate, his performances were moving for their honesty, dazzling for their humour.  I am not sure the world of poetry is ready to receive such gifts warmly, but it may be that Von Joel builds his own future roles by redefining where he, and poetry, needs to go.  I see him as a star entertainer, an inspirational figure.  If he stays true to his dreams of rejuvenation and ambitious clarity, he will make a difference in his 30s.  He's one to watch.  These three poems showcase the poet's hip-hop sensibility, confessional honesty, sense of humour, and energy.
Lager Lout About
About L.L
About has been writing 13 years.
About started bombing About in 97’
About S.W.11
About all city.
About is the lion at the drinks,
About is good looking,
About is hilarious,
About is definitely the loudest,
About is in with all the boys,
About flirts with the barmaid,
About buys the first round,
About nods his head to the beat,
About has a mate called Stella,
About will probably meet Charlie later,
About hates Sambucca but will still drink it,
About does not have a drink problem.
About dislikes people before he likes them,
About judges immediately, within 3 seconds,
About would probably hate you.
About smuggles his drink out,
About sometimes gets thrown out,
About says ‘bruv’ allot,
About pisses allot,
About has a bottle up his sleeve,
About eats chips,
About argues with the cab driver.
About is up for another beer,
About is never sick.
About gets home and shouts at Spinny,
About smashes up his flat,
About snores on the sofa.
About can’t get it up.
About will be sorry in the morning.
We were expelled,
We were kicked out,
We went to Feltham,
We still wake up on the blue mattress.
We are very paranoid,
We are back on the Prozac,
We are ashamed.
About has a drink problem.
---
The Optimistic Pessimist
Escaping from the shhh I’m seeing,

Clair M. said…
I'm always taken on a self reflecting journey by your honesty and provocative words. Real talent and a big name for the future.
Thu Feb 10, 10:16:00 pm 2011