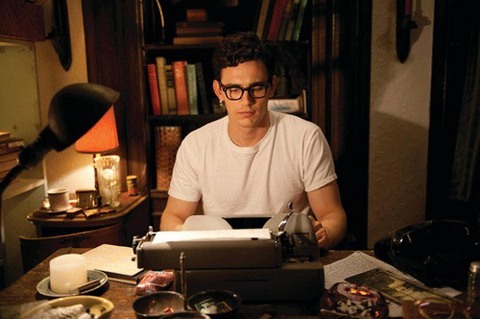 I saw Howl in Soho (London) tonight - perhaps one of the hippest places to catch such a film.  I went with a friend who is a performance poet, and we felt part of an occasion of sorts - but the response from the audience was muted.  I once read with Lawrence Ferlinghetti, in Paris, at Shakespeare & Co., and Ginsberg was due to stay at my apartment in Montreal just before he died in 1997 - so I feel some affinity to these people (I dedicated Poetry Nation to Ginsberg).

Howl was an influence on my writing and way of life when I was growing up, thought not the dominant one - that would have been Harmonium and Life Studies.  Still, it is (pun intended) seminal.  Therefore, I was bound to be either blown away, or let down (puns intended).  I was both, in the eventuality.  Elements of the film deeply moved me - James Franco's impersonation of the poet is spot on, and his reading of the poem, and interview sequences are flawless recreations.  The period detail, and the sense of reliving a great cultural American moment are electrifying, and Franco/Ginsberg reveals a surprisingly original and sensitive perspective on poetics, and frankness, that reminds me of his central importance as a father of queer writing.

The trial sequence, with a handful of great actors - John Hamm, David Straitharn, Bob Balaban, Treat Williams and Jeff Daniels - is a word-for-word reenactment drawn from courtroom transcripts - and as such is both authentic in its awkward period diction and at times frustrating - a dramatic reinterpretation would no doubt have refined the dramatic tension - but it is also moving and comic as the legal squares spar over the "necessity" of using vulgar and sexual language.  Sadly, the movie's downfall is in the grotesque and amateurish animation sequences, which over-literally interpret the poem's chief tropes - when they appear I shuddered, my heart sank - it may be the worst misstep I've seen in a released film.  A pity.

Despite that, the three other intercut worlds - 1955 reading, 1957 trial, and 1957 interview - are evocative and important.  Anyone who cares passionately about gay literature, America poetry, or obscenity trials will want to see this; for fans of The Beats or Ginsberg, or indeed James Franco, it will be essential.  For those wanting a hit of Hamm or that 50s vibe, I'd recommend caution; a later rental might be better.  It may not be as loud or wild as a howl, but it is more bang than whimper, still.  My last thought on this is that the poignant effect of Ginsberg's parents - his father the poet, his mother the lobotomised mental patient - loom large over his life, and are presiding spirits here - making the poet a more vulnerable and human figure than the iconography usually allows.  Angelheaded hipster, maybe - but this isn't a hagiography.

One last thought - Howl is often a terrible poem, it seems obvious from this film.  I didn't go in thinking that.  But it is also often astonishing, and its rhetorical power and surprise makes it the anti-Four Quartets - a musical composition on tradition and religion and place.  Ginsberg was a great coiner of words, phrases, images, and though he relies too heavily on the surrealist "of" trick, there's enough imagination in the mantra to make it work - but I can't imagine an audience of young people really listening intently to the whole thing cheering and grinning relentlessly.
Email Post
Labels: american poetry film The Beats