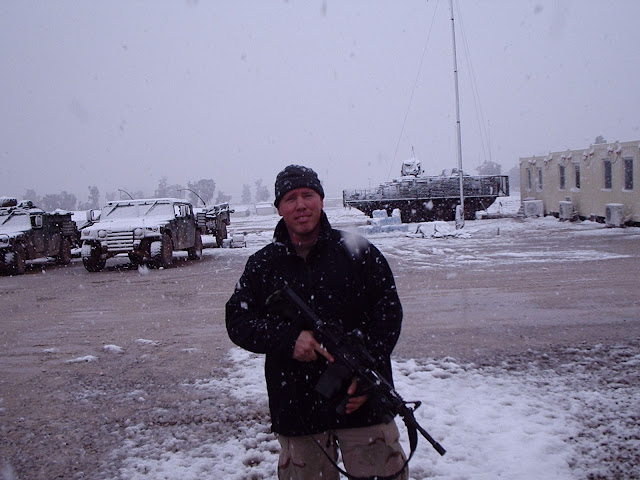 Eyewear is very glad to welcome American poet Brian Turner (pictured) to its pages this Friday - aptly enough, perhaps, as revolution continues to stir in the Middle East, the source of much of his most powerful material.  Turner is the author of two collections of poetry: Here, Bullet (Bloodaxe Books, 2007) and Phantom Noise (Bloodaxe Books, 2010).  For the second of these, he was shortlisted for Britain's most prestigious poetry prize, The T.S. Eliot Prize.

Turner earned an MFA from the University of Oregon before serving for seven years in the US Army. He was an infantry team leader for a year in with the 3rd Stryker Brigade Combat Team, 2nd Infantry Division. Prior to that, he deployed to Bosnia-Herzegovina with the 10th Mountain Division (1999-2000).

His poetry has been published in Poetry Daily, The Georgia Review, and other journals. He's been awarded a USA Hillcrest Fellowship in Literature, an NEA Literature Fellowship in Poetry, the Amy Lowell Traveling Fellowship, the Poets’ Prize, and a Fellowship from the Lannan Foundation. His work has appeared on National Public Radio, the BBC, Newshour with Jim Lehrer, and Weekend America, among others. He teaches at .

Turner, compared by some to Keith Douglas, is the most significant and effective soldier-poet of the first decade of the 21st century writing in English, and therefore his work takes on an almost talismanic power, which the quality of the writing supports.  Given that the biggest story of the last ten years is 9/11-Iraq-Afghanistan-Egypt, and American responses to those iconic nouns, Turner should be read by anyone interested in the world as it is, and the world of poetic imagination, and reckoning.  His poem, "The Hurt Locker" was later the title to an Oscar-winning film.

Professor Suman Gupta writes in his important new study of Iraq invasion literature, Imagining Iraq, on Turner's Here, Bullet (published in America in 2005).  He says the poems articulate "an exquisite sensitivity to being a foreigner" in Iraq post-war.  Gupta notes how the book explores the metaphoric and linguistic implications of translation and its failure, and the violence which results.  He observes how Turner seemingly withholds judgement, the better to impact the reader.  It is, Gupta argues, a "poetry of alienation arising from the occupation experience". Turner will be reading for the Oxfam Poetry Series, London, in July 2011.  Can't wait.

The Mutanabbi Street Bombing
March 5, 2007
In the moment after the explosion, an old man
staggers in the cloud of dust and debris, hands
pressed hard against bleeding ears
as if to block out the noise of the world
at 11:40 a.m., the broken sounds of the wounded
rising around him, chawled and roughened by pain.
Buildings catch fire. Cafes.
Stationery shops. The Renaissance Bookstore.
A huge column of smoke, a black anvil head
pluming upward, fueled by the Kitah al-Aghani,
al-Isfahani’s Book of Songs, the elegies of Khansa,
the exile poetry of Youssef and al-Azzawi,
religious tracts, manifestos, translations
of Homer, Shakespeare, Whitman, and Neruda—
these book leaves curl in the fire’s
blue-tipped heat, and the long centuries
handed down from one person to another, verse
by verse, rise over Baghdad.
*
As the weeks pass by, sunsets
deepen in color over the Pacific. Couples
lie in the spring fields of ,
drinking wine, making love in the lavender
dusk. There is a sweet, apple-roasted
smell of tobacco where they sleep.
They dream. Then wake to the dawn’s
early field of lupine—to discover themselves
dusted in ash, the poems of Sulma
and Sayyab in their hair, Sa’di on their eyebrows,
Hafiz and Rumi on their lips.
In memory of Mohammed Hayawi
VA Hospital Confessional
Each night is different. Each night the same.
Sometimes I pull the trigger. Sometimes I don’t.
When I pull the trigger, he often just stands there,
gesturing, as if saying, Aren’t you ashamed?
When I don’t, he douses himself
in gasoline, drowns himself in fire.
A dog barks in the night’s illuminated green landscape
and the platoon sergeant orders me to shoot it.
Some nights I twitch and jerk in my sleep.
My lover has learned to face away.
She closes her eyes when I fuck her. I imagine
she’s far away and we don’t use the word love.
When she sleeps, helicopters
come in low over the date palms.
Men are bound on their knees, shivering
in the animal stall, long before dawn.
I whisper into their ears, saying,
Howlwin? Howlwin? —Meaning, —Mortars?Mortars?
Howl wind, motherfucker? Howl wind?
The milk cow stares with its huge brown eyes.
The milk cow wants to know
how I can do this to another human being.
I check the haystack in the corner
for a weapons cache. I check the sewage sump.
I tell no one, but sometimes late at night
I uncover rifles and bullets within me.
Other nights I drive through .
Firebaugh. . Kettleman City.
Some nights I’m up in the hatch, shooting
a controlled pair into someone’s radiator.
Some nights I hear a woman screaming.
Others I shoot the crashing car.
When the boy brings us a platter of fruit,
I mistake cantaloupe for a human skull.
Sometimes the gunman fires into the house.
Sometimes the gunman fires at me.
Every night it’s different.
Every night the same.
Some nights I pull the trigger.
Some nights I burn him alive.
poems by Brian Turner; reprinted with permission of the poet
Email Post
Labels: america featured poet geo-politics war