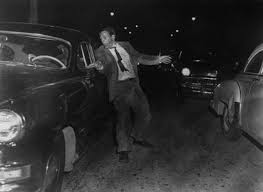 Sad news.  The great character actor Kevin McCarthy, best-known for his role in the original sci-fi poli-sci film classic, Invasion of the Body Snatchers, recently died. In an odd coincidence, the film was seen as a commentary on McCarthyism; Joe McCarthy was no relation. His ultimately-paranoid performance has become a benchmark for the genre, and the movie introduced the idea of "pod people" into the imaginative lexicon of North American suburbia - where unthinking ideological "mind absorption" seemed to have struck all those zombified by the Eisonhower-era.  "They're here already!  You're next!" could be the rallying cry for any concerned citizen though - afraid of either immigrants or the Tea Party.  Several times remade, never bettered. 59 years later, it remains one of the must-sees of the period.
Email Post
Labels: film politics sci-fi