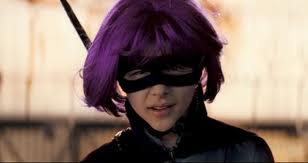 When I worked as a screenwriter for children's television in the 1990s, for the likes of HBO, Paramount, Hanna-Barbera, Alliance-Atlantis and the CBC, I was sometimes called upon to write "bibles" for shows.  One of the chapters was usually on the "danger factors" or "violence levels" for the kids at home - or, to put it plainly - could they repeat this at home, and die or kill or wound or injure themselves in the process?  Most of the shows I worked on wanted to avoid, at all costs, danger levels that could or might lead to a child being hurt, in any way - and indeed, psychologists worked with writers often, to strike a proper balance.  This sort of concern might surprise some industry-watchers, who consider everything aimed at children as cynical or profit-led, when, in fact, and not just to avoid litigation (but that too), quality is often uppermost in the creators' minds.

Not so with the cartoon-like live-action superhero movie of the summer, just out on DVD, Kick-Ass.  I saw it last night, finally, and was amused and appalled in equal measure.  Kick-Ass reads like a rather obvious inversion of the Spider-Man arc (and cites this influence often): a nerdy high-school kid takes on a new life as a costumed crusader.  This time around, the boy gets to sleep with his crush, has no powers to speak of and is beaten to a pulp, and lives in a world where the bad guys and other heroes are equally cruel and vicious.  Notably, Big Daddy, an ex-cop seeking revenge for his wife's death at the hands of a kingpin crime-lord, has trained his little daughter, Hit-Girl, to take bullets in her stride, and use most knives and firearms with lethal force.

Kick-Ass is subversive, fun, and sometimes thrillingly nihilistic.  It would be amoral not to recognise, though, that, while it is "just good clean fun" that phrase needs to be retooled for the 21st century with its denuded values, and recalled as "just good dirty fun" - because Kick-Ass is also Sick-Ass.  The sight of an 11-year-old child sadistically murdering people (she kills perhaps 50 or 60 onscreen, often in gruesome ways) dressed in a kinky outfit with a purple wig and mask, and using - among others - the "c-word" - is of course wildly unexpected and therefore entertaining.  Indeed, the film's own characters allude to her Nabokovian charms.  It is also - I hate to party-poop on a major franchise that everyone loves - wrong.

Perhaps because it is wrong it appeals - it could hardly appeal for being vanilla-nice.  No, the makers of this film have trod on the dreams of childhood innocence and woven a crazy tapestry from the remaining shreds.  How can a young actor be made to speak such lines, and kill so many?  We live in a bizarre world, now - one where pornography, violence, and outrage are broadly encouraged and applauded, but where expressions of faith or conviction are often derided.  As Lady Gaga recently suggested, we are living through the Apocalypse.  Perhaps not.  But this ain't Kansas, either.
Email Post
Labels: film religion