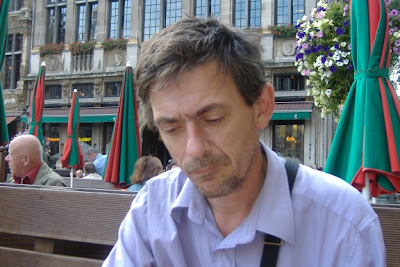 Eyewear is pleased to welcome poet Tom Phillips (pictured) this good Friday. I've been following his poetry ever since I included him in the global anthology Short Fuse (Rattapallax, 2002), launched in New York City eight years ago. I then included his work in Salt's 100 Poets Against The War, in 2003.

Phillips is a freelance writer based in Bristol, that thriving city for poetry. His poems have been broadcast, performed, recorded and published in various parts of the world. His first book Burning Omaha (Firewater, 2002) brought together early poems and performance pieces while his second Reversing Into The Cold War (Firewater/Poetry Monthly)  is a response to his travels through Albania and other parts of eastern Europe. Below is one of the poems from that collection, which I recommend.  Phillips is now studying for his PhD at Reading, with poet-scholar Peter Robinson.  He contributes reviews and comment to Eyewear regularly.

Kilos of watermelon, sweetcorn,
pirated software, collected works
mark the end of this EU road’s
hazarding some kind of future
between floral tributes at every turn –
outside abandoned camp gates,
by bullet-holed station wagons,
on the lip of a drop to the river
where, going three days unnoticed,
the lethal current surged and worried
at decomposing remains:
the old dictator’s eldest son.

Tom Phillips said…
Dennis - that really wasn't my intention. Though I can see why you might have thought that from the bullet-holed station wagons. As Todd's pointed out, this poem's part of a sequence: the gist of which counters, I hope, the off-the-peg equation between Albania and chaos.
Tue Sept 21, 11:38:00 pm 2010