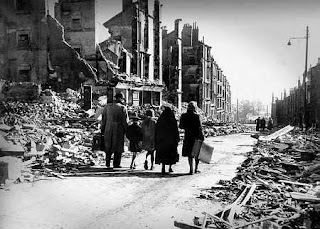 The famous Blitz on Britain from German aerial bombardment began 70 years today.  Few events in the West's 20th century have remained as vivid, as imprinted on a culture's imagination.  A fortnight before, Allied planes had bombed Berlin, triggering the counter-attack (both sides went on increasingly to explore the idea of a "total war" from the skies, culminating in the fire-bombing of Dresden; then Japan) - one of my great-uncles flew on the RAF bombing raids over Germany; many of my relations died in Coventry, which some claim Churchill let be destroyed to conceal broken codes for strategic purposes.

Perhaps, in the popular imagination, the Blitz is most omnipresent in the following: the documentaries of Jennings, such as Fires Were Started; references in novels (such as when the Narnia children are sent to the countryside); and in the poems of WWII.  Most famous of these Blitz poems must be Dylan Thomas's 'A Refusal To Mourn the Death, by Fire, of a Child in London'.  And many films, from The Life and Times of Colonel Blimp onwards, have returned to these moments.  After the Blitz, there is no other?

Interest does not fade - Bomber County is a new book by Daniel Swift (no relation) - which has as its thesis the rather stale (if popular) misconception that there are "no poets of the Second World War" - when obviously, the great poems of Thomas, FT Prince, Keith Douglas, TS Eliot, Lynette Roberts, and many others establish otherwise (and have been anthologised on several previous occasions).  Larkin, Amis and the Movement turned against the raised emotionality of this period when they emerged as serious figures in the mid-50s, betraying a high point with characteristic irony and indifference - paradoxically precisely the sang froid that allowed the "Blitz spirit" to arise.
Email Post
Labels: london the blitz war

Norbert Hirschhorn said…
I arrived in England, a refugee from Austria, in May 1939. When the Blitz began, I was two years old, and the memories are indelible. This poem is from my first collection, A Cracked River (Slow Dancer Press, London 1999).

The closet lodged under the stair -
we huddled
in the dark all night, listening
for warplanes. Because I was two,
they held me too tight. A large,

hard table crowded the room
where I slept. We clustered
beneath when buzz-bombs
stopped their whine. I must
have been three. I hardly cried.

In back, the kitchen: coal stove, a stone
sink where my mother soured the milk.
At four, I loved the smell of roasting
potatoes. Curtained French doors

led to the garden – a pear tree,
a plum tree, crab apple.
Baby apples, my father said.
I was five. A hole

in the garden lay covered by dirt
and rippled tin. We slept there until
the All-Clear. I was
as old as the whole war. Trains

roared past our garden: colossal,
reckless, going somewhere important, America.
I was six. I told the postman
to send our letters to America.