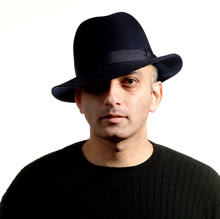 Eyewear is very pleased to welcome Suhayl Saadi (pictured) this Friday. I met him  when we were both flying BA back to London, after both appearing at The Blue Met Literary Festival in Montreal. By coincidence, we were sitting side-by-side; I'm a relatively nervous flyer, and so like to talk if I can, as the films rarely delight as much as conversation does. Dr. Saadi kindly obliged, and we had soon gotten over most of the ocean. As poet, and prose writer, among other things, he seems to be one of the most uniquely gifted British writers of his generation.

Saadi was born in Yorkshire in 1961 of Afghan-Pakistani parents, and grew up in Glasgow, becoming a medical doctor. He is a widely published novelist, dramatist and poet, and the author of a short story collection, The Burning Mirror (2001), shortlisted for the Saltire Society Scottish First Book of the Year Award, one of the stories in the collection also being awarded second prize in the 1999 Macallan/Scotland on Sunday Short Story Compeititon. His radio and stage plays include The Dark Island, broadcast on Radio 4 in 2004, Saame Sita (2003), The White Cliffs (2004), and The Garden of the Fourteenth Moon (2006).

His prose includes the novel, Psychoraag (2004), shortlisted for the 2004 James Tait Black Memorial Prize (for fiction), and the 2005 National Literary Award (Pakistan), longlisted for the 2006 International IMPAC Dublin Literary Award and winner of a PEN Oakland Josephine Miles Literature Award. It was published in French in 2007.

The poem below is a tribute, an elegy really, to Pakistani actor and activist, Mohammad Ali, who died in 2006.

Ali bhai,
You are a burning flame in a world of ice and war
Hero, villain, shaman, you slip with elegance and mellifluous skill
Into the nafs of another, less and more
Shahenshah-e-Jazbaat! We are alive!

Then you crossed the River of Fire
And films came in a flood,
A lifetime of lantern magic, O Burning Star!
You followed the path of the old hud-hud

Yet beneath the fame,
The game you left when it turned sour
You toiled and sweated with heart’s blood and ishq
For the ordinary people, the folk of the hour
The porters, the farmers, the women of city, field and village
To these, your real co-stars, your Friends on the Path,
You gave with a spirit opened with the song of Islam, the greatest of the naath

Ali bhai,
Your name is honesty, keen as the blade of Haider Ali
Your awards glitter like jewels in the great cup of heaven:
Kaneez, Saiqa, Wehshi, Aas, Aaena, Insaan aur Aadmi, Dooriyan…

But alas!
The sun has left the sky
And all around, darkness flies
We will never see your like again
Yet we will always see your likeness
Up there, in the celluloid river of dreams,
Far beyond the world of beasts and men

Ali bhai,
Please accept our salaams and dua
For you, our Friend and for all the Friends who have led the way,
Pyar, mohabat, ishq, for the urva
For Waheed and Alauddin and Noor Jehan
Tell them we poor mortals sing and dance and sway
With their songs, their images that flicker with life, breath
Score-upon-score, scene after scene, every day,
In mohalla, haveli and peasant farm

Remember, Ali bhai
You owe seventeen rupees to the cafeteria!
We will keep the record straight - for our sake
Remember, Pakistanis
That we owe Ali Bhai
A glimpse of the Path, the Word, the Song, all the Worlds!
Love is at stake!

But look now! Look up beyond the camera lens,
Through the looking-glass portal
At last, the sun is rising – mubarak ho!
Mohammad Ali Rohtaki lives on!
Listen, then, to his voice
Echoing softly through the darkness of time:
“Khamosh na raho, khamosh na raho…”

note, due to formatting, a few lines may not be indented as in the original version.