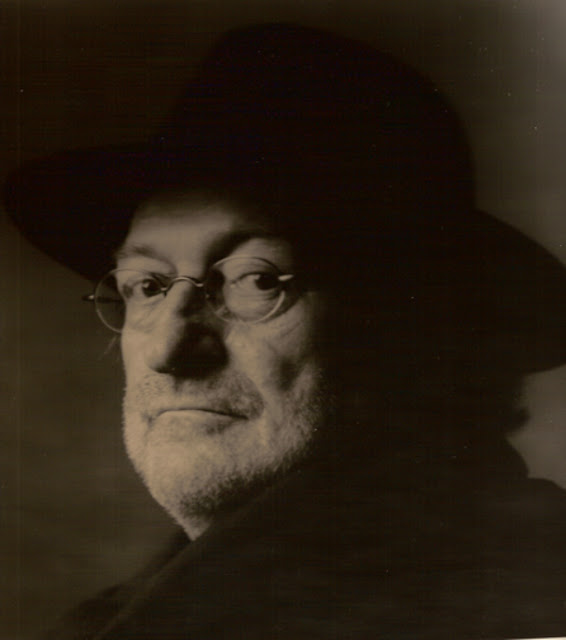 Eyewear is very glad to welcome Dutch poet Hans van de Waarsenburg (pictured) to these pages this rainy Friday in London.  He was born in  in1943 and published his first collection of poems, Gedichten (Poems), in 1965. His collection De vergrijzing (The graying) was awarded the prestigious Jan Campert Prize for Poetry in March 2004 he received the first Municipal Award of the Helmond Town Council for his entire work. Between 1997 and 2000 he was chairman of the PEN Centre of the Netherlands.
In 1997 he became chairman of The Maastricht International Poetry Nights - an impressive biannual international poetry festival that was held for the seventh time in October 2010.  It was there that I first met this larger-than-life figure, a charismatic, fun, gregarious figure, whose love of poetry and poets radiates from his very being.  Since the 70s he has gone on to publish many books, from presses as far afield as Mexico.  He's a Dutch poet well worth getting to know, in translation if needs be.  I find his witty, lyric, sometimes melancholy, poems, of love and artfulness very moving, and sympathetic to my own aims and feelings.
The Boathouse at Laugharne
We're having tea and write picture postcards
Light of forgetfulness hangs over the
Beyond this the ocean treading water
Stanzas in a posthumous tourist life
Thirty-nine, thirty-nine. A few more months to go
Ambiguous in death or one's birthday
Saving up thirst like ebb, until the tide washed
The boathouse, the wind returned with sluggish motion
You sat down, I stood about. How much longer
This going places together, out of time
This never-ending dream of ships departing
An emigrant going down in blotchy corn
From the platform we watched the same view
Low tide that afternoon, discolouring the mud
You in his chair, tearing up time (a card?):
'Do not go gentle into that good night'
Crumbs, cake and china, and milkwood
In our tea. I do not dare to check this light
There is a hole in time and the nagging
Of a hangover. Darkness reflected, it's getting later.
---
The Last Waltz
Had I forgotten you in stereo sound?
Dolby, Dolby, in that square in ?
The Schiller Hotel, floating on the past
Like a cabin cruiser. I was asked to show
My singing diploma, paint my
Masterpiece – you would not take less,
Madame, and touch down in .
As if streets were flown in from
With me painting clowns’ faces on
Non-existent covers. For a moment I
Was in with you, sailing in ‘a dirty
Gondola’ to the dead of yesteryear.
***
When Time proved an impertinence. We
Drank prosecco to this tender reunion and
Later dreamt of frayed ends hanging like
Wisps of hair over the celluloid.
Sound full of noise and scratches. But whenever
Your tongue waltzes in my ear and the first bars
Sound once again, the old dance resumes,
Madame, and everything spins as of old.
poems by Hans van d Waarsenburg; reprinted by permission of the poet