Bourneography, or, On First Looking Into Anna Chapman 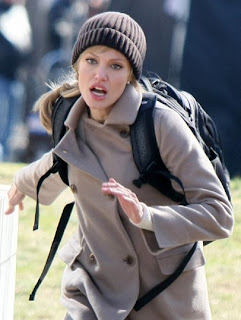 Philip Noyce directed one of my favourite films, Dead Calm, an utterly thrilling (and romantic) movie about a bereaved couple and a handsome madman on an isolated yacht (based on an idea by Orson Welles for a movie).  Then he directed a lot of big-budget thrillers based on Tom Clancy, some a little hit and miss.  Angelina Jolie, who stars in his new film, Salt, is a curious actor - although world-famous - she has been in relatively few good films - and, more interestingly - alternates between action blockbusters like Lara Croft: Tomb Raider and Wanted, and more intelligent worthy dramas like The Changeling, A Mighty Heart and fusions of the two like Beyond Borders.  She worked with Noyce last century in The Bone Collector, so they have a history.  Salt wants to be a franchise like the Bourne trilogy - that most influential of all genre movies of the 00s, reshaping Bond and the style of all subsequent thrillers.  It has a good shot at this aim.

It's not as fun, smart, or fire-on-all-cylinders as other chase-em movies, though - one thinks of The Fugitive as the classic of this kind of pic; nor as sinister-slick as Telefon, Winter Kills, The Manchurian Candidate, or any number of sleeper-spy movies it also borrows from.  I enjoyed the first act immensely - Salt's escape from CIA HQ is cool and fast-paced up to her rendez-vous with the Russian president.  I had a few problems with the spider venom (far too obvious why it is needed) telegraphed by the silly detail of her having a spider-scientist for a husband (a wasted August Diehl, so good in Inglourious Basterds) - and the identity of the second Russian mole, while not immediately a dead give-away, is hardly surprising.  The actual plot (or web of intrigue, natch) is too silly for words - and actually impossible to execute, based on about a million things going exactly to plan.  "Day X" is kicked off in a way that, working backwards, actually makes no sense.

That being said, Jolie kicks serious butt, and does a few amazing stunts, killing a baddie in the last reel in one of the most astonishing ways I've ever seen.  It is odd, but we never see this amazing killing machine in a T-shirt - her arms are always sleeved - because Jolie is sadly near -anorexic in look, and her arms have no muscles (she is no Linda Hamilton) - but she kicks and leaps and clings to walls and trucks like Spider-woman.  I found the "War Games" scene at the end sort of exciting, however, again, nonsensical (the use of a machine-gun to breach a top-secure room is just dumb, and ricochets would have killed Salt).  The very end is, like the Dark Knight, or the recent Robin Hood, an attempt to establish the myth of a loose-canon outlaw working beyond the margins of society and civilisation, hunted and hunting.  Seen as a bit of a spoof, and with a few satisfying moments, Salt is a mid-level actioner worth paying to see on a big screen.  I'd even go to Salt II.  But it doesn't compete with Anna Chapman.
espionage film film review