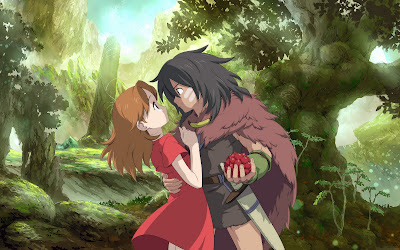 A Little (Less Than) Kin but More Than Kind:Kangurashi No Arrietty (Arrietty and the Borrowers)

“I left my childhood in the garden green”: the haunting refrain of Cecile Corbel’s ‘Arrietty’s Song’ is first heard in the opening minutes of Studio Ghibli’s film adaptation of Mary Norton’s The Borrowers, when the voiceover narration aligns the viewer with Sho, a young boy with a heart defect who is being sent to spend the summer with his Aunty, in the house where she and his mother grew up. From the opening, the film has a sense of melancholy loss similar to The Virgin Suicides, an unusual mood for a children’s film. The mood is borne out by the story: Sho’s illness is left unresolved at the end, and Arrietty – the Borrower whom he meets in the house – is leaving with her family. Leaving the house, and leaving Sho.

In many ways, the film does everything it can to induce the viewer to want another ending: one in which Sho’s friendship with Arrietty, his courage in twitting the cranky housekeeper Haru, and his Aunty’s care and understanding, would ensure a safe life for the Borrower family (and thus recovery for himself) in the old house. Much is made of the magical Empire dolls’ house that Sho’s grandfather had made in England after his childhood sightings of the ‘little people.’ Filled with replica European high culture objets on a Borrower scale, it is an exquisite work of craft, made by a master cabinetmaker, Aunty tells Sho. Part of my heart yearned for the classic moment of recognition and reconciliation, in which, as a talisman of luck for Sho’s operation, Arrietty would bring her parents, Pod and Homily, to meet Sho and his Aunty, who longs to recapture her own childhood glimpses.

But, like Ghibli’s adaptation of Howl’s Moving Castle, with its bittersweet, unsentimental conclusion, Arrietty doesn’t give the audience what it wants, but what it needs. Rather than a closing a satisfying narrative about how non-human Others (toys, pets) should love (ie: submit adoringly) their human masters and conform to a human-shaped world, as the third Toy Story film did relentlessly, the end of Arrietty opens out into risk, an unfamiliar gesture for a children’s film. Arrietty lights out for the territory, but – unlike Huck Finn – she doesn’t abscond. She is travelling with her parents, and with a non-domestic Borrower, Spiller, who rescued Pod and knows of the whereabouts of other members of the vanishingly rare species.

There’s a deeply serious ecological thread in the film, as there was in Ghibli’s previous film Ponyo (On a Cliff by the Sea). There, the non-human Ponyo made a choice to stay in the human world with her human friend Sosuke, who proclaimed that he loved her as a girl and as a fish. Here, Sho and Arrietty have a profound conversation about vulnerability and hope, punctuated by Nisa the cat attempting to catch Arrietty and eventually learning to respect her. That cross-species respect, as fostered by Sho’s gentleness and Arrietty’s boldness (she seeks out Sho against her parents’ wishes and fear-inducing stories), is central to the film: Arrietty and Sho are not kin; the kindness between them draws not on the simple but superior fellow feeling of liberal human rights discourse (Borrowers are like us, but smaller and cuter and therefore we should organise their lives paternalistically, as Sho attempts when he makes a life-threatening gift of the dolls’ house kitchen), but on a more complicated respect for, and across, difference. Thus, the film has to resolve in being unresolved, in the chances we all take in moving through a world inhabited by Others, and in which we are Other.

Animation makes this possible in a way that live action can’t (although the live action adaptations of the books, for TV and film, have their own charms). It’s a matter of scale, but not only scale: as Lord of the Rings showed, in-camera tricks of scale are as old and effective as perspective drawing. The animation can use scale in a subtle and indeed poetic way: Arrietty’s worldview is profoundly different from Sho’s, a fact suggested by the combination of Sho’s voiceover and the aerial shot of Tokyo that opens the film, and is reaffirmed by the Borrowers’ experience of Sho’s ‘gift,’ a godlike act of destruction that (painfully, in light of recent events in Japan) resembles an earthquake. Arrietty’s perspective, on the other hand, is on the scale of insects, those non-human Others we frequently despise and fear (as useless and destructive) or celebrate (as merely decorative, or as serving human needs): she consorts with crickets, mealy bugs, ladybirds and butterflies. The scenery that accompanies her journeys around the house and garden is that of minutely-detailed woodgrain and leaf-vein. Viewing the world with Arrietty, we see the crumbs and crumbling of the old house that is not visible to the humans: the torn screen door that allows her into the pantry to rescue Homily and the basement of broken bricks, rats and detritus suggest that the house is not the paradise we might want it to be.

And this makes me rethink the nature of the film’s melancholy. The large and rambling house has been practically empty (childless) until Sho’s arrival (which has a similar galvanising effect to the arrival of the family in My Neighbour Totoro), and the humans talk about and imply the impact of changes in values and lifestyles in contemporary Japan, from cellphones to global business travel. ‘The garden green’ is, itself, overgrown and neglected, making it a safe place for childhood to be both lived and preserved. So the melancholy of the ending is that humans could learn from Borrowers about not being attached to bricks, mortar and merchandise; not only the Wombling message of ingenuity and ingenuousness needed to live frugally, pleasurably and determinedly outside capital, but a lightness of being that sparkles into view during the end credits as Arrietty sees a fish flicking its tail in the river beneath their floating teapot: dangerous, but also vivid in a way that life in a dollhouse would never allow.
Wildness. Which, as Jay Griffiths points out in Wild, is also the terrain of the sexual. As the fish passes by, Arrietty accepts a raspberry roughly proferred by Spiller, his eyes averted. Glimmering redly, the berry connects visually to the carefully-chosen red dress and hair clip Arrietty wears to go ‘borrowing’, and to the garden poppies that blow behind her when she finally lets Sho see her. Aged fourteen, Arrietty is a character tremulously (and tremendously) on the verge of active sexuality, which is figured, subtly, as part of her becoming, along with/as analogy to her first borrowing mission – which does, after all, take her into a teenage boy’s bedroom. The subsequent scene in which she hides, silhouetted, behind a tissue is flirtatious and sensitively erotic. As Steve Rose has written, this is a particular hallmark of child characters of all genders (including magic-fish-girl) in Ghibli’s films, and the absolute inversion of Disney’s sanctimonious, scrupulously anti-sexual narratives.

Arrietty and Sho both leave their childhood in the final encounter in the ‘garden green’, but it’s no ‘garden of Eden’: childhood is a time of enforced dependency, induced anxiety and limited horizons for both of them. Through their interaction, they have braved the encounter with the Other, and sought neither dominance nor submission despite the fears and sentiments of the adults around them. Sho recognises that, much as Arrietty and her family borrow from humans what is needful, but do not seem committed to ownership, he too has ‘borrowed’ Arrietty for a time, at a particular moment in his life. He cannot keep her any more than Homily can keep and carry the dolls’ house kitchen with its miniature iron stove. This idea, that we ‘borrow’ each other as needed, not only makes all the world and its creatures a library where we must treat each other (as potential borrowers and borrowees) with care and respect, but underlines the sense of transience, vulnerability and risk that are the hallmark of Ghibli’s style.

What epitomises this in Arrietty is the animation of glass, a notoriously difficult substance to represent, as Jonathan Jones notes concerning the glass orb that may prove definitive evidence that ‘Salvator Mundi’ was painted by Leonardo da Vinci. Reflective and distortive, glass shows us ourselves, becoming definitional of human identity – as in the ‘mirror moment’ of identity formation in infancy, and the ‘mirror test’ of non-human species’ abilities of self-recognition. From Arrietty’s feisty self-regard in her mirror as she styles her ponytail in the hair-clip she will eventually give to Sho as a sign of their shared experience, to the glasses and jars of the human world that distort, and eventually imprison, the Borrowers, the fragility, transparency and reflexivity of glass remind us that we only borrow our identity from the mirroring regard of others.

Sophie Mayer reviews film for Eyewear.  Mayer is a bookseller, teacher, editor and the author of two collections of poetry, Her Various Scalpels (Shearsman, 2009) and The Private Parts of Girls (Salt, 2011), as well as The Cinema of Sally Potter: A Politics of Love (Wallflower, 2009). She writes about film regularly for Sight & Sound.
Email Post
Labels: film review guest review japan Sophie Mayer

Anonymous said…
Very thoughtful review. Having just seen this film on Blu-ray with surround sound on a very large projection screen, I can attest that the visuals and the use of sound set a new benchmark for anime in terms of detail and putting the viewer 'there' in the story. The thunderstorm was the most realistic I have heard in a movie. Technically, it was a tour-de-force.
Story was disappointing at the end. It needed another 30 minutes or so and for what we all wished to see happen, to happen, even if not in quite the way we might imagine. It was a bittersweet ending that left me a bit empty. But I enjoyed it both in original Japanese and again, with my daughter, in English. A must have for any Ghibli fan.
Wed Jun 06, 09:08:00 am 2012