JCS On The Spice Girls 15 Years On 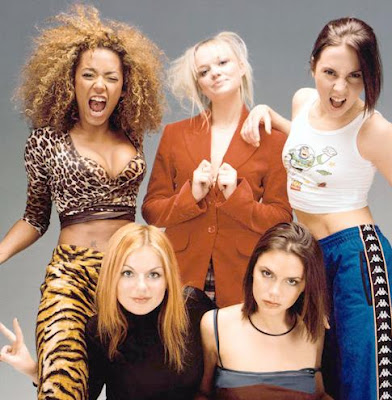 15 Years of the SPICE GIRLS

It’s exactly 15 years since the Spice Girls burst onto the British music scene with ‘Wannabe’ and stormed to number one. In July 1996 an unknown all-girl pop group were suddenly all over television and radio promoting a song more pop than pop itself, about really really wanting a zig-a-zig-ah and friendship never ending. The sentiment was fresh and girl power was born. The group were hard to miss, with each girl having their own individual style, which at the time was practically unheard of in the pop world. Prior to Ginger, Baby, Sporty, Scary and Posh, the commercial music industry, particularly in the UK, was dominated by indie pop bands like Oasis, Blur and Radiohead, the super divas Celine Dion and Mariah Carey, and boybands that dressed the same like Take That and Boyzone. Despite their beginnings as a manufactured group, Geri, Melanie C, Emma, Melanie B and Victoria broke away, wrote their own songs, got themselves signed and did it their way. The Spice Girls represented freedom, fun, girl power and individuality and the world loved it. In celebration of this 15 year anniversary, I’m going to look at some of the highlights that have come from this phenomenally successful group of girls over the years.

Spice was the must-have album of 1996 if you were at school. With only ten tracks, half of the songs were #1 singles. While people remember ‘Wannabe’, ‘Say You’ll Be There’, ‘2 Become 1’, ‘Who Do You Think You Are?’ and ‘Mama’, the album also boasts some pretty extraordinary album tracks, like ‘If U Can’t Dance’ and ‘Naked’. Spice was released on 4th November 1996 and went on to sell over 23 million copies worldwide. In just a few months since the girls released ‘Wannabe’, Spicemania was hitting fever pitch. There were Spice Girls chupa chucks, Spice Girls duvet sets, Spice Girls wall-paper, Spice Girls Pepsi cans, Spice Girls chocolate bars, Spice Girls dolls- Spice Girls everything!

Just twelve months after Spice, came its second coming, SpiceWorld. If ever there was a part one and part two of an album, it was Spice and SpiceWorld. ‘Spice Up Your Life’, ‘Too Much’ and ‘Viva Forever’ all hit #1 in the UK, whilst ‘Stop’ stalled at #2. SpiceWorld was not only the band’s second album, but also the soundtrack to their movie of the same name. While the movie may have been panned by critics, it still managed to top the UK box office over Christmas 1997 and hit #2 in the USA, stopping behind ‘Titanic’. SpiceWorld seemed to pretty much mirror the success of Spice, selling over 20 million copies and sitting comfortably inside the Best Selling Albums of All-Time list.

In May 1998, during the ‘Spice World Tour’, Geri Halliwell split from the group, which certainly affected the future of the group. As chief songwriter and the master mind behind Girl Power, what seemed to be the passionate creator of the group, had jumped ship. Melanie B was the first of all of the girls to release a solo single, which was the urban ‘I Want You Back’ with Missy Elliot, which struck #1 on the same day as one of the group’s Wembley Stadium shows. Later that year, after almost a year of touring, the four remaining girls recorded and released ‘Goodbye’, scoring their eighth #1 and third consecutive Christmas #1.

1999 was a quiet year for the group, but was the first time we saw Geri Halliwell, Emma Bunton and Melanie C step out as soloists. Geri Halliwell released her first solo album, Schizophonic, which closely followed the Spice Girl album ingredients- ten brilliantly catchy pop songs. ‘Look at Me’ hit #2, while ‘Mi Chico Latino’, ‘Lift Me Up’ and ‘Bag It Up’ all made it to #1. Emma’s first release outside of the Spice Girls was a cover of ‘What I am’, recorded with Tin Tin Out, which hit #2, behind Halliwell’s ‘Lift Me Up’. Melanie C initially experienced the least successful start to her solo career. While her duet with Bryan Adams, ‘When You’re Gone’ had been a huge hit the previous year, Melanie’s first few solo singles, ‘Goin’ Down’ and ‘Northern Star’ were only moderately successful and her album Northern Star charted at #10 and swiftly fell out of the chart. Despite the luke-warm reception to Melanie C’s solo work, when ‘Never Be The Same Again’ was released in early 2000, the song soared to #1 and remained there for two weeks. Northern Star subsequently re-charted and climbed to #4, eventually shifting over 4 million copies worldwide. Northern Star remains the most successful release from any solo Spice Girl.

Three years after Spiceworld, came Forever. The album was heavily R&B influenced, apposed to the previous pure pop sound the group had stuck to. The double A-side ‘Holler’ and ‘Let Love Lead The Way’ hit #1 and the album made #2 but quickly disappeared from the chart and memory. The album was largely seen a failure, both commercially and critically and spelled out the end of the Spice Girls.

Also at the end of 2000, came Melanie B’s debut solo effort, the underperforming Hot. While the album produced a couple of top ten hits, ‘Tell Me’ and ‘Feels So Good’, Melanie B’s solo career never really gained any momentum. Just when it was looking like the golden five-year wonder of the Spice Girls was coming to an end, Geri Halliwell released her biggest success to date, her cover of the Weather Girls’ ‘It’s Raining Men’, which stayed at #1 for two weeks and served as the theme to the massive movie ‘Bridget Jones’s Diary’. Around the same time Emma Bunton released her debut solo album, A Girl Like Me, with lead single ‘What Took You So Long’ which, like Halliwell’s ‘Men’, hit #1 and stayed there for two weeks.

Victoria Beckham was the last Spice Girl to release a solo album. Her self titled album received very poor critical and commercial success and she has yet to make another. Where her singing career has waned, Victoria has become the best known of all of the girls. She is now a very successful fashion designer, television personality and is, of course, married to David Beckham and is mother to their four children. Victoria’s most successful single remains ‘Out of Your Mind’ with Truesteppers, although it is ‘Let Your Head Go’ which seems to be the favourite with fans.

Beyond ‘It’s Raining Men’, Halliwell’s career seemed to slow down, with her third album Passion failing to make the Top 40. Melanie C continued on a steady path, gaining a cult following and is about to release her fifth solo album, The Sea, in September 2011. Emma Bunton achieved the rare feat of her second album receiving more success than her first. Free Me gave Emma the hits ‘Maybe’, ‘I’ll Be There’ and ‘Free Me’. Emma went on to have a very successful television career.

In 2007, all five of the Spice Girls announced ‘The Return of the Spice Girls World Tour’. The tour, initially planned as a one night only affair, played 47 dates and grossed over $70,000,000, including a record 17 sold out nights at London’s o2 Arena. The associated album, Greatest Hits, hit #2 and received Platinum status. While Spice Girls comeback was clearly a success, at the end of the tour, in February 2008, the girls continued on their separate journeys. All of the girls are now mothers. Melanie B is a judge on Australia’s ‘X Factor’, has her own fitness interactive game and has featured on many American shows; Melanie C continues to find success as a solo artist and starred in the West End version of ‘Blood Brothers’, winning awards along the way; Emma Bunton is a judge on ‘Dancing on Ice’; Victoria Beckham continues to be Victoria Beckham- one of the most written and talked about celebrities in the world; and Geri Halliwell is about to unleash her fourth solo album. It looks like the Spice Girls, in one way or another, are still very much a part of our celebrity culture as they were fifteen years ago.

JCS is Eyewear's Music Critic. He divides his time between London and Hull.  He is working on a novel.
Email Post
Labels: 90s England JCS music