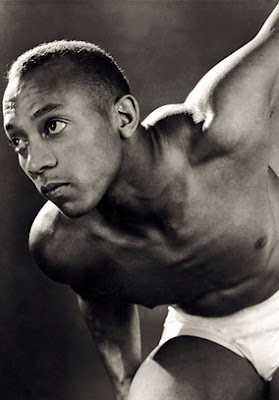 It seems almost like a different age, but it was only 75 years ago today, August 3, that Jesse Owens - my hero and candidate for greatest American - won the 100 m sprint at the 1936 Berlin Olympics, shaming the racism inherent in that most evil and grandiose of settings.  Owens, whose own life was not a bed of roses after his triumph in Germany, returned to an America unable or unwilling to accept African-American excellence, poise and achievement - and, these days, that sounds sadly familiar (I watch from afar as another great man, President Obama, is under-appreciated by too many Americans).  I read about Owens when I was a kid.  Although Canadian, we were taught to read using the Lippincott Readers, which emphasised American history; well, so be it.  I was brainwashed.  But I learned much about my neighbours to the South, not all of it bad.  Anyway, throughout my life, whenever facing hurdles, I have thought of the great Owens.  Of course, Owens was human, not an angel.  He smoked too much for too long, and died of lung cancer; he raced horses for money; and, struggled financially for years, working as a gas station attendant to make ends meet after his Olympian moment had flickered out.  He went bankrupt, and was only redeemed in the last decade of his life, when the US government allowed him to have a more public role.  Few people have had such highs and lows, but fewer have run under the gaze of AH, and mocked an ideology of race hatred with sheer force of bodily grace and aplomb.
Email Post