Karla What You Ask For: Tinker, Tailor, Soldier, Spy 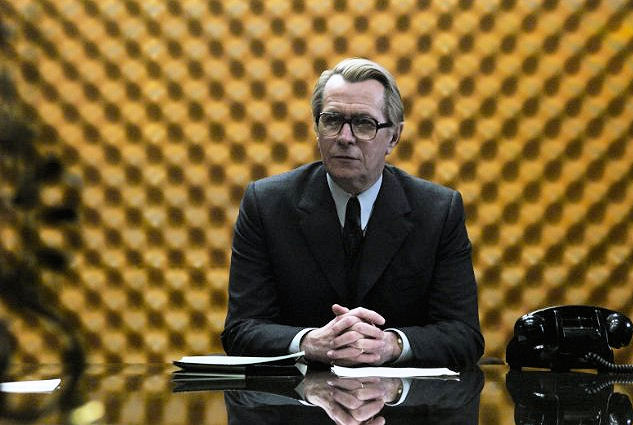 Eyewear could hardly have asked for a better film.  The Le Carre adaptation, best known as the vintage Alec Guinness slow-burner from television, Tinker, Tailor, Soldier, Spy, divides its times (before and after John Hurt as Control) simply by the glasses that Smiley (Gary Oldman) wears - the past is more owlish and horn-rimmed, the present (1970s Wimpys-era Britain) Bakelite rims.

The director, Tomas Alfredson, is an emerging master of mood and nuance - his masterwork was Let The Right One In, the subtle vampire story.  Perhaps because Oldman has played Dracula, he seemed right for the part.  Smiley is a sort of husk, a prematurely stooped, stiff, pale, bespectacled spook.  Oldman is hidden in the role, a sort of mole inside his own character.  A few flashes of his eyes, a few small gestures.  He barely moves.  He is the spy as spider, waiting for the fly.

The film is ravishingly retro, a Larkin-landscape of all that was crummy about the 70s in London.  Britain seems no less disconsolate than behind the Iron Curtain (Budapest).  Except for a few tense set-pieces, the film is like watching paint dry - which is half the point.  Some paint.  Like Munich, Spielberg's thriller, without the thrills, or The Day of the Jackal, without the rushing around, the movie proceeds like the chess game it is a simulacrum of.  The pawns are the lower echelon spies that Karla and Smiley move.  The Queen is Smiley's wife, who, in 1955, during a failed turning exercise, Smiley hands over, as it were.  Smiley's wound is that his deadly enemy knows his weak point, his love of a woman, and uses it mercilessly.

This movie is the most beautiful English-language film I have seen since, perhaps The Constant Gardener, another Le Carre filmed by a foreign film director.  There is a level of composure and delicacy here, in the palette and style, that is close to genius.  Just don't expect more than a bat squeak of adrenaline.  Suffused with melancholy, the final vision is of Smiley's stare, begging the question: what does he really see in all this?
espionage film review

P. M. Doolan said…
I saw Le Carre being interviewed on German television last week. I hadn't realised that he speaks impeccable German and that he did his military service in the Austrian army.
Sun Sept 18, 12:03:00 pm 2011

Dennis Tomlinson said…
I saw Tinker, Tailor, Soldier, Spy with my girlfriend yesterday and I thought it was a masterpiece. (But she fell asleep!) Gary Oldman behind his glasses was as inscrutable as Alec Guinness had been. The film kept you guessing as to who the mole was until the truth came out, bit by bit.
Wed Sept 21, 08:19:00 pm 2011