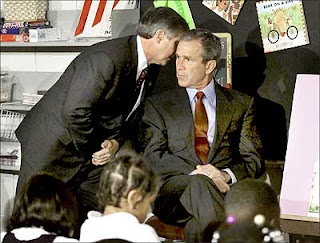 There are several faces of the most famous day in American history - and the defining moment of the 21st century.  There are the faces of the valiant rescue workers, caked in soot and sweat.  There are the astonished faces of the shocked and bereaved, fleeing, simply staring, or returning to help.  And there is the clueless face of the worst American president ever, on hearing the news of the attack.  Ten years later, it is clear that 9/11 ended the so-called "post-modern" era.

Instead, the terrifying event immediately stamped the age with its defining images, and its defining conflict - between The West, and a newly-resurgent variant of fundamentalist Islamic ideology.  Depending on who you talk to - Tony Blair for instance - the West's reaction - wars in Afghanistan and Iraq - did, or did not, act as bellows to the coals.  The question which remains unanswered is -  was there anything "we" could have done differently, before or after?  Nothing justifies the murder of the day - but history lessons would have forewarned "us" that exceptionalism and neo-colonialism, coupled with a hedonistic, capitalist and scientific world-view, could hardly endear us to people with a less-secular perspective, people who felt our very existence was illegitimate, and a profound insult to their way of life.  What no one quite expected was that such people could be so determined, and so deadly.  Or so imaginative.

Ten years later, the cultural impact of the day has been mixed.  It has informed music, plays, films, poetry, and fiction - but few if any truly great works of art have emerged from the decade dealing directly with 9/11.  Nor have the wounds healed yet.  It is all too soon.  Politically, many argue that we are in the long wake of the attacks now - that with the killing of the mastermind, and the decline of the wars it triggered, and the rise of China, new forces and factors are at work - the Arab Spring was the broom to wash away the debris of ten years before.  We can't be sure.

The towers collapsing remains our benchmark for contemporary outrage, and fear.  The decade has seen the rise of very violent horror films, and a swing to religion in America - surely interconnected - our bodies have been exposed as ultimately, utterly vulnerable to atrocity anywhere, even in our heartland - and morbid nihilism or evangelicalism seem apt responses.  True Blood, Twilight - what are vampires but victims that carry on by other means, bled dry, yet romantically driven forward?  Elsewhere, we found distraction in Hogwarts, deeply impacted by 9/11 of course in its political nuances; and followed the true post-9/11 star, Matt Damon, whose everymanism coupled with quickfire responsitivity to violence became the icon of action films.

As to the conspiracy theories, they have faded in lustre, it seems.  The new conspiracy theory is that America is led by a secret Muslim, a sort of Hawaii Malcolm X, as if the planes of that day were a dark stork, that dropped a Midwich cuckoo into our midst - who would grow to become president, and tarnish America.  2012's elections will next define where America, and the world goes - back to a Texan imbecilism, or further on, past the green light.  All we know is, many died and suffered that day.  And we will never forget.
9/11

Unknown said…
Texan imbecilism? You doubtlessly mean Rick Perry. I have little doubt, however, that Perry will not win the nomination. The front runner will be one of the following three: Ron Paul, Mitt Romney, or Jon Huntsman. One of the remaining of the three will be chosen as VP candidate. I predict Paul/Huntsman or Romney/Paul, or Huntsman/Paul. Paul will need to choose someone who appears moderate, like one of those two, devoid of conspiracy theorist credentials in order to obtain full confidence of a voting public. Obama has been a sham He has been, as a president, not much better and not much worse than Bush. At least he could have tried harder, either way, left or right, ideologically, or in other ways. He is a cipher, signifying nothing but hubris and nothing else besides. The ironic thing is that I used to wholeheartedly root for him. That is my shame, our shame. Still, it is good that we had a black man as President. We will again, just as we will have a woman as President. Everything shouldn't be based on simple intelligence, speechmaking capabilities, charisma, or race, however. Our ability to discern a candidates ability and vision matters the most. Paul, Huntsman, or Romney could well define the future of America.
Tue Sept 13, 01:38:00 pm 2011

I'm not American but I do follow American politics quite closely. The Republican nomination will go to either Rick Perry or Mitt Romney, neither of whom (hopefully) will have enough support to defeat the incumbent president, Barack Obama.