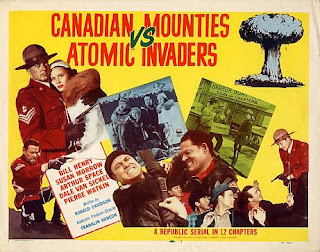 Eyewear is very glad to celebrate Canada Day in London.  Apparently, there will be hockey and rock and roll music in Trafalgar Square all day.  Blue Rodeo, who I first saw at the McGill Ballroom a quarter-century ago, take the stage at half-nine tonight.  Meanwhile, the young newly-wed Royals are in Canada itself - that brash young nation, filled with natural resources (not least of which are its rugged optimistic and fair-minded people).  Storm clouds hover over the Rockies, though, and peril not even the Mounties can arrest lurks, in the news that the CBC mandate is up for review, and that venerable corporation, Canada's BBC, may be slashed ruthlessly by  Conservatives, twirling their mustachios.
canada Canadians in Britain