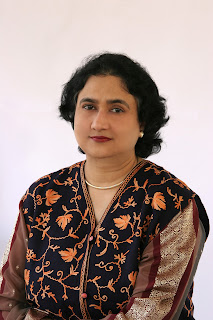 Eyewear is very glad to welcome, this rain Friday in London, the British poet Shanta Acharya - pictured here.  Acharya was born in won a scholarship to , where she was among the first women admitted to . She completed her doctoral thesis before going to Harvard as a Visiting Scholar. Later, she joined Morgan Stanley Asset Management in , and subsequently worked in the City with various firms. She was Executive Director at from 2002-08.
Acharya is a poet and literary critic as well as author of books and articles on asset management. Her doctoral study, The Influence of Indian Thought on Ralph Waldo Emerson, was published by The Edwin Mellen Press, . Her five books of poetry are Dreams That Spell The Light (Arc Publications, 2010), Shringara (Shoestring Press, 2006), Looking In, Looking Out (Headland Publications, 2005), Numbering Our Days’ Illusions (Rockingham Press, 1995) and Not This, Not That (Rupa & Co, India; 1994).
She is also the founder of Poetry in the House, a series of monthly poetry events at Lauderdale House in north , which she has been hosting since 1996.

Days depart silent, marching solo solemnly.
Turning the key in my door absentmindedly
I enter my home; the alarm screams like a banshee.
I feed her with secret codes to keep her happy.
There’s a phone message from a stranger, left in error;
1471 informs me the caller withheld their number.
As I switch on the radio, plug the kettle for tea,
the blackberry vibrates on the kitchen table in ecstasy.
By the time I respond I’m left with missed calls.
The postman rings twice, I fly down the stairs;
No one’s there. A card says someone called, I wasn’t in;
proof I did not imagine hearing the postman ring.
The card informs me I can collect the letter
24 hours later at the post office, it needs my signature.
There’s some malarkey outside. I open the door
thinking I’d catch the postman, rescue my letter.
I meet a woman who can’t find the key to her car
with the children inside, is it in this street or another,
for the life of her she cannot remember!
The microwave beeps when milk for tea is ready,
takes deep breaths to calm down, remain cool and steady.
I switch on my computer; it springs into action
like a magician conducting numerous tasks with precision,
Greets me with the message: Path cannot be found!
After all these years not being able to understand
Each other, my personal computer and I are destined
for divorce. I email, blog, tweet, text; respond
to pending messages on Facebook and LinkedIn.
Settling down to dinner with TV and a thriller,
as if on cue, the landline and mobile phones ring together.
When I call back, the universe is otherwise engaged.
Leaving messages all over the place saying I called –
I set the alarm for next morning before I go to bed;
switch off, have a long, silent conversation with God.
poem by Shanta Acharya; reprinted with permission of the author.
featured poet