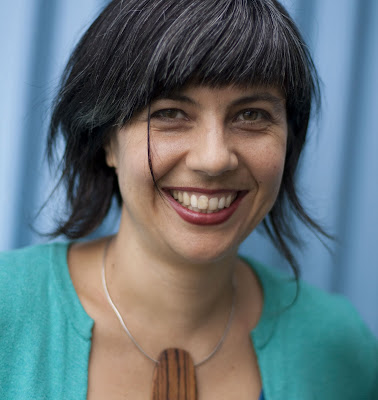 Where did the British summer go?  Eyewear is looking out on another rather dull London day.  Still, there is some good news - we have a great Friday feature.  Anna Swanson (pictured) is a poet and children’s librarian living in Vancouver, Canada. Her debut book of poetry, The Nights Also, from Tightrope Books, asks how identity is formed and challenged in relation to chronic illness, sexuality and solitude. It won a Lambda Literary Award and the Gerald Lampert Award for best first book of poetry in 2011, which is the most significant Canadian debut collection prize (similar to the Yale or Forward in prestige).  As I was chair of the judging panel this year for the Lampert (given out by the League of Canadian Poets), it is especially heartening for me to be able to showcase this brilliant younger poet on my British blog this morning.  Her book was very lyrical, very moving, and very witty - and cohered as a whole in a satisfying way.  Also, its exploration of sexuality was refreshing, especially from a British perspective, where far too few lesbian, gay and bisexual poets write candidly of their experiences, notwithstanding the fact we have a gay Poet Laureate.  If there's one Canadian poetry book you read this year, why not start with Swanson's?  The poem below is from that collection.

The patron saint of bagpipes

The patron saint of bagpipes and the patron saint
of concerned parents are having at it
at last. Gathered around, cussing and cheering,
are the patron saints of adult acne, late periods,
of slot machines, locking the keys in the car, of calling
out the wrong name in bed. And, of course,
the patron saint of trying to fall asleep
when you’re lonely. These are the lesser saints
in their lesser heaven, blessed only with the power
to hold back your hair while you puke
in your private stall. They gather round,
waiting, as Our Lady of the PTA
threatens to get all fisticuffs with Bagpipes.
Bystanders become a crowd, and the crowd
starts to circle. Perhaps, I tell myself, perhaps
this is why they can’t hear me. Tonight, when I’ve called
everyone in my book, when I’ve asked that thin thread of faith
to show itself like fishing line against the dark lake.
No matter what small thing I ask for—waiting poised
to close myself over any flash or morsel—no one answers.
So, as I drift into that place that isn’t sleep,
I lay my money down and buy Pipes another pint,
sidle up behind PTA and whisper loudly—
Thinks he can intimidate her. I know, and especially
after how he’s been eyeing her daughter.
Then I join the crowd.
canadian poetry featured poet

Christian Ward said…
I enjoyed reading this, Todd. The warmth and humour of Anna's poem shines through. It's also refreshingly honest and makes me want to dip into her collection.
Sat Jun 18, 09:57:00 am 2011