The New Kate Nash Album: My Best Friend Is You 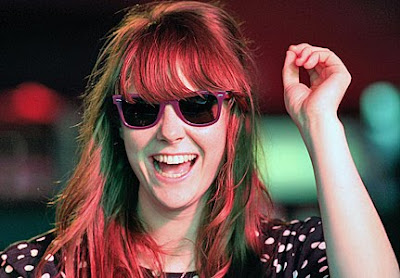 Kate Nash's new album, out today, My Best Friend Is You, has received some mixed reviews. The main concern was that this upbeat pop singer had perhaps suddenly become too eclectic, complex, or ambitious (whereas, perhaps in sexist form, critics have saluted Paul Weller for being just that with his own new major album, Wake Up The Nation). Stuff and nonsense. This is one of the most fun, charming, and even thrilling, pop albums of the last few years, and easily better than her debut, Made of Bricks, which made Nash a star in Britain. If you want to know what meeting a cheeky, smart, sassy, fun-loving and ironic young British woman is like, in today's Broken Britain of 2010, play this record. Nash has effortlessly, but stylishly, used many classic pop song tropes, from riot grrrl, to Bow Wow Wow, to Pixies, to wall of sound, to jangly indie, to power pop - to forge a new and contemporary voice for her generation - a magpie generation to be sure. In the process, she's assembled 13 songs that are, if sometimes unexpected or a little challenging, never less than great to listen to. As she says: I read Glamour and the Guardian, in her stunning spoken word rant (full of sex and vinegar), 'Mansion Song'. Nash has just stepped ahead of her pop grrrl peers with this off-beam masterpiece.
Kate Nash music