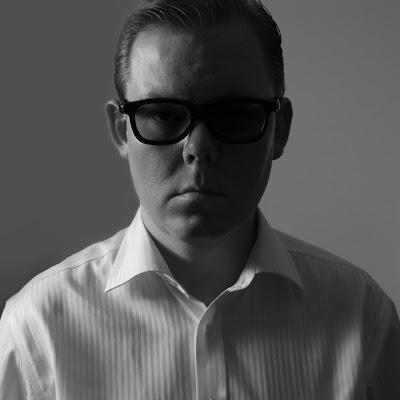 Eyewear is very pleased to welcome Teddy ("Ted") Sloe (pictured) the antipodean poet, this special day before the Good Friday pause. Sloe is one of the leading poet-editors of his generation, a New Zealander by birth, who has lived in various exotic and far-flung places, like French Polynesia, Panama, Wisconsin, and parts of Russia, but now is semi-firmly based in Paris, where he lives with his fiancee, the successful stockbroker Myrna Malone. As such, Sloe considers himself a "Franco-Kiwi". Though he often chunnels over to the vibrant London scene.

Sloe has published six collections, starting with his celebration of all things 80s - Ultravox (1999) from Gold Key Publishing, in Manitoba. This was followed by three more Gold Key books, in rapid succession - European Eatery (2002); Sesame Street Revisited (2004) and perhaps his masterpiece, Summer Snowballs (2007), which explores the harrowing death by tuberculosis of his step-mother, Tamara Sloe, the New Zealand cabaret singer, and the joys of the great outdoors. These were swiftly followed by 2008's Collected Poems, sub-titled Underdown, and 2009's Post-Collected, and UK debut, Avant Sex Hospital, from Short-torch.

Sloe has also been an active anthologist. He has been arguing for a long time that all things spoken aloud and/or digital are important and shape the spirit of poems. His most important anthologies are either eco or politico in scope, range and cleavage: Global Poetry Inc. (1999); 212 Poets Against Global Warming (2003); Hemisphere Ahoy! (2007) and his tirade against the bankers, Kapital Punishments (2009). He is currently co-editing New Modern and Anti-Modern Poets of New Zealand, with his brother, Gary Sloe, and their friend, the experimental poet-butcher Hans von Truck, transplanted to Paris from Vienna.

Sloe is a controversialist, and on various online magazines, networking sites, e-forums, and even by telephone, manages to stir trouble and air his dirty laundry as his psycho-social needs require. He also organises various "Word Smash-Ups" where poets, punks and restless others compete for top honours, in seedy hostels and dilapidated warehouses in low-rent districts. He also runs a reading series for Very Old Poets, in a junk shop in Paris Nord, all money raised to go (eventually) to Doctors Without Beards.

His CDs and DVDs for this cause include 92 Very Old Poets for the Helpless, and Line Up: The Best of the Rest. Relentlessly driven, exuberantly gifted, protean, over-sized, and Orson Wellesesque in ambition, scope and range, Sloe, though he has won no prize or peer-recognition of note, manages to keep himself in the game by Vachel Lindsay-like self-promotion and Barnum and Baileyian activities. Eyewear is glad to welcome this international stylist par excellence maintenant, this fish of April flung gasping on the shore.

This Be The Reverse

Slam the brakes and gyrate the hips.
Lips are for licking, screw
Your plaster to the sticking
And point out where your little

Sister is sitting. They shoot hoarse
Dancers don't they?, you go first -
Quench that long thigh-thirst
And debate the lung's inner burst

That Kraftt-Ebbing diagnosed.
We want underthings unearthed, slips.
Get garters. I announce my fling
With vocables here, on this bed, Hearst

Or Kane, able to punish any stable.
Bend over and expose your swell gams,
Ma'am. The Kiwi shrieks in the foliage,
Fecund exploitation mars this page.

I regret the excavation of the tar
In Alberta, but think Regina king.
Suck and mope on my swagger, Tam.
Mother, brother, father - all spawn dying

Like the low sea-birds mapped in oils.
Kiss my placard and march, baby.
Let us go now and ruin a new world
Sweet with sheep and love and rabies.
I first saw a top shelf coastal girl like a girl.