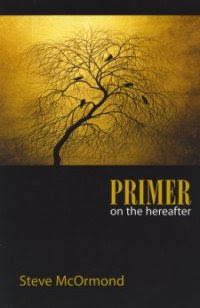 It is common for poets from McOrmond’s area of the world (Atlantic Canada) to approach nature with a humility so complete it can look like ennui to a distant observer, but for McOrmond, it is rarely that simple. It’s really more of a sense of being comfortable with one’s smallness and with the natural world’s blunt and frequently massive ecology. In Primer on the Hereafter, his second collection of deftly tuned and plainly spoken lyrics, McOrmond wades into the physical world around him and is at his best when not causing too many ripples, instead positioning and repositioning his sensitive lens in an attempt to frame a narrative for his focussed observations. I like to think of it as a book of nature poetry that is not always (or even often) about nature.

What I like best about Primer on the Hereafter is the subtle crisis of self-representation that flares up every time McOrmond busts out a down-homeism to give place-specific weight to the scenes he’s setting in the book. The opening poem talks of crows above a town full of local colour with references to Prince Edward Island geography (Dorchester St) and East Coast slang (pogey). It is followed two poems later by a rebuttal of culture as a use-what-sells marketing tool when he flips a PEI tourism slogan on its head in Come Play on My Island. This tension between reference and marketing, between true memory and simplified nostalgia, haunts all of the Atlantic-facing poems in the collection. When McOrmond hangs the word “authentic” out above the lines that came before and after it in the selection “How authentic:/the old salt at the helm and the boy/untying the bow line” we can feel the bitterness inherent in the word. McOrmond begins to enter into a conversation in these early poems about “quaintness” and all that word does to a culture. It’s essentially a conversation about colonialism, weighted down by everything such conversations bring with them.

Wolsak & Wynn’s publicity for Primer features a quote from the Toronto Star that reads “there’s both small-town genuineness and urban polish in his work.” What’s so hilarious about the quote (among other things) is that the speakers in these poems would be very unlikely to associate genuineness exclusively with the rural environment or polish with the big city. McOrmond spends Primer on the Hereafter mining the detail from his varied environments in the hope of lending them complexity beyond tacky tourism schemes and, it would appear, major Canadian newspapers. Let’s not blame Wolsak & Wynn for this, though. They’re just using what will sell…

For all the lyrical mastery in Primer on the Hereafter, it’s frustrating that the book doesn’t come out of its shell any more than it does. Some of the less memorable pieces in the collection, with their subject matter of old boats and old grudges, sound like a talented composer dutifully playing his scales in preparation for an opus that blips onto the page for a few lines here and there but never fully coalesces. But I can’t issue a full-throated complaint on anything in this book, it’s just too dextrously written to fall into any of the traps that it flirts with.

Case in point, my favourite poem in the whole piece has nothing to do with Prince Edward Island and nothing to do with nature, "Luminous veil" is a very eat-my-shit take on the city of Toronto’s decision to install a protective net under a local viaduct known as a popular retreat for suicide-seekers. McOrmond, always one for the underdog, adopts the voices of the inconvenienced: “Do you hope we’ll slink home/and rethink our lives, find the god of/second chances?”

And there’s more. As McOrmond’s book relaxes into its later sections, we find a poem about Sweden ("Stockholm"), lust among the elderly ("Man in a room full of nudes"), TV ("The little girl in poltergeist") and more. Variety sneaks up on you a bit in this book and it may be because while the location and philosophical bases of the poems start to shift around McOrmond’s voice is a lot less dynamic. I think I’m fine with this, on the whole. It’s a really convincing and often punishingly witty voice, but it’s difficult to stay with a speaker who uses the same tone for one hundred pages without wondering how you’re expected to be affected by all this when he clearly hasn’t changed his mind about things during the few years it took to write the book.

I feel I need to repeat that, all flea-picking aside, this is a hearty and rewarding read. McOrmond won the Atlantic Poetry prize for Primer, and I’ll vouch for the jury’s choice. It’s a well-churned collection; rhythmically satisfying and full of the kind of sharpened memory befitting a poet who wants very much for there to be specific meaning to be gained from his experience and the experiences of those who came before him. Primer on the Hereafter’s most powerful after-effect might be the confidence it leaves in you that Steve McOrmond’s next book will be better than this one, and the one after that will likely be better than them both. Whereas Primer is approaching its second birthday and another collection is (assumedly) being prepared, what better compliment could a reader really issue?

Jacob McArthur Mooney is a 24-year-old Nova Scotia native now living outside Toronto. He is the founder of The Facebook Review and an editor at ThievesJargon.com. His first book, The New Layman’s Almanac, is due out in March, 2008 from McClelland & Stewart, Ltd.
guest review