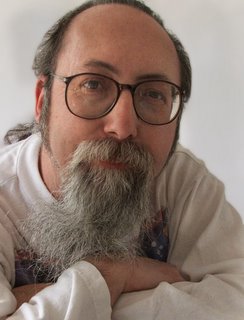 Derek Adams (pictured here, in a photograph taken by his daughter Charlotte) is a poet Eyewear thinks well worth reading. His often macabre imagery is perhaps due to his wonderful eye for detail.

He was born in Walthamstow, East London in 1957 and has lived in Essex since 1985. A professional photographer since leaving school, he is a) currently working at the Natural History Museum and b) one of the organisers of The Essex International Poetry Festival.

His chapbook, Postcards to Olympus, won the Poetry Monthly Booklet Award 2004 and was named "Best Individual Collection Of Poetry For 2005" in Purple Patch Magazine's annual Best of the Small Press list; a collection Everyday Objects, Chance Remarks was published by the Littoral Press and unconcerned but not indifferent - the life of man ray came out from Ninth Arrondissement Press, soon after. He was the BBC Wildlife Poet of the Year in 2006.

Normally it is the one dark place in a well lit town
where only ghosts and cats roam, but tonight
among the quiet stone rows there is a digger
and a tent lit up like a big top,
police at the gates and cameramen outside.
Later when your black sheeted package
has been delivered to the pathologist,
when you've been winkled from your box,
placed on the stainless steel table
and he takes a surgical bladein his rubber gloved hand
cuts from both shoulders to sternum
then down to the pubic bone,
peels back the skin to reveal the ribcage,
will he call the photographer over
I think we'd better have a picture of this
his eyebrows raised between mask and cap,
as he stares at the space behind the breastbone
at that cold black cavity that should contain a heart.