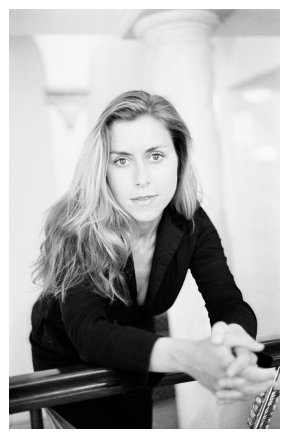 "ACP" - Agnes Catherine Poirer - pictured here - covers the London beat for the French press, and effortlessly combines the twin francophone gifts of smarts and style, much as Sartre did - and also enjoys the curious French habit of turning everything elite and sexy into an acronym.

Recently, she pointed out, quite rightly, in The Guardian, that there are few if any public intellectuals in the UK. No, comedians and BBC radio hosts don't really count, nor ghost writers for Wayne Rooney et al.

The English don't accept this - perhaps to be expected.

To confirm her thesis, she pointed to the fact that a woeful 3% of books published in the UK are translations, whereas in France the figure is more like 25%. This could be due to the fact that the French need to translate Shakespeare, Wordsworth, Dickens, Austen and Swift, and we don't. However, there does seem a high-brow trade imbalance here, especially if one considers that probably 99% of those translations are of Tintin.

Worse, though ACP doesn't mention this, British publishers don't even bother to publish English-language writers from places that aren't worthy. Almost no American, Canadian, Indian or New Zealand poets get published in London. The map of what's relevant, at any rate, gets drawn by a mostly-prose-bound media, guided by the infallible oracles known as the Prize.

Meanwhile, British author terrible, Zadie Smith, has joined the growing list of figures Time Magazine - apologist for the worst excesses of American self-satisfaction since the 50s - wishes to claim for their own by adding her to their list of the "100 most influential people of 2005".

She is the only British person on this list, which is staggering. Smith should immediately refuse this honour, lest she quickly assume iconic status and move to Hollywood to host a gameshow. ACP knows better than to accept such Yankee blandishments; like all good French, she resists. She simply is the gad-fly par excellence.