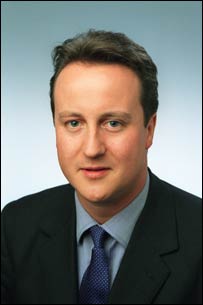 Tory leader David Cameron (pictured) appeared today on the classic (BBC) Radio 4 show, Desert Island Discs. Famously, Mr. Cameron is trying to revive the Conservatives by leading them away from the unfriendly opinions of their majority of "crusty old Majors" - into a land of hip, young families with windfarms on top of their affordable housing.

A live version of "Tangled Up in Blue", The Smith's "This Charming Man", Radiohead's "Fake Plastic Trees", something by REM so obscure it must have been suggested by a spin-doctor, and a rousing anthem from the hot new Mormon-led band, The Killers.

He isn't much of a reader, though, as he selected a cook book for his one read (he already has Shakespeare and The BIble, though) - and his luxury, booze. Perhaps he should have selected The Collected Works of Rachel Carson, and a recycling bin, to really win us over.