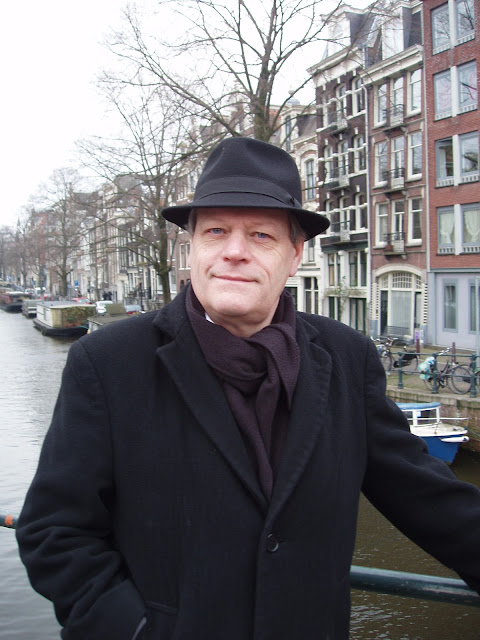 Eyewear is very glad to welcome Robert Sheppard to these pages this Friday.  He was born in 1955 and educated at the University of East Anglia.  Sheppard's most recent books are the Complete Twentieth Century Blues from Salt which collects work produced over a decade or so and Warrant Error from Shearsman Books, his response to the 'September 12' we have been living through, whether we will or no. Also a critic, he has published recently a monograph on Iain Sinclair from Northcote House and has edited The Salt Companion to Lee Harwood. His Poetry of Saying is one of the major statements, along with Duncan's Failure of Conservatism, in the struggle of critique against the complacencies of the Movement/post-Movement mainstream.


He is Professor of Poetry and Poetics at Edge Hill University, Lancashire, and edits Pages as a blogzine.  He can be heard reading poems on The Archive of the Now.  Sheppard's writing -  of the left, and engaged with the ethics of poetics, questions, through his critical and literary works - the conservatism of much of British poetry - and is one of the key ouevres, in the last thirty years, of the UK "other" community of poets and writers, sometimes known as linguistically innovative.

from ‘Out of Nowhere’

from Warrant Error
You build from song
an architecture of tumbles
a dance of stumbles on a shelf of air.
You name this the space left by the human.
You excavate or the strata of resting Jews
and the ribbons of tight ink on Pinkas Synagogue wall
with the surnames’ bejewelled rubrication
(Whenever erased they’re re-written
the act of their scrubbing
inscribed anew)
Stones leaning splinter through time
for those with no names
possess no death. You ex-
hume the ex-human in human unfinish
After the Last Word
of the dead text necrophliles come
our next words
which yet survive
as reasons
for living happily out
of nowhere and now
and then on to multitopia bearing
the stories so far
whose passions read as co-
eval becomings
geographies of affect in
capital Isness where
human unfinish is all about
‘… comme l’aube l’azur timide…’
She hangs heavy from her corset for this story
so far. She raises the arc of one red-dotted brow
and flutters firework lashes at her fist-headed vamp
They scowl into each other’s dark eyes but see only
nipples espying their true love through peepholes
The boy loves their leather fronds their clamped chokers.
He licks along twisted seams across buckled tattoos
through the purple mesh on their big legs swinging.
They mould themselves with man-maid passions.
She pushes her sex through his clench of meat
until her blind phallus drops as its straps sag.
Chained cuffs cover his un-pouched cock-ring.
She shrinks his gaze she bites her fake nails
while her lover’s glove kisses his lips, and he swoons
The poem sends itself from anywhere
to your little box there it replays it
over and over. No redial no recall.
Dead ears drop in your lap. Pause.
No reply possible skip onto Message Two
I see the twin cathedrals they’re twisting below
terror has been hijacked by artifice. Commas cower
along as we torque above them out of control
spluttering towards the radio tower full stop
That was your fake captain speaking
through me printing fear backwards
through his script. Out of nowhere
poems by Robert Sheppard
featured poet

When you open your mouth to speak, are you smart?  A funny question from a great song, but also, a good one, when it comes to poets, and poetry. We tend to have a very ambiguous view of intelligence in poetry, one that I'd say is dysfunctional.  Basically, it goes like this: once you are safely dead, it no longer matters how smart you were.  For instance, Auden was smarter than Yeats , but most would still say Yeats is the finer poet; Eliot is clearly highly intelligent, but how much of Larkin 's work required a high IQ?  Meanwhile, poets while alive tend to be celebrated if they are deemed intelligent: Anne Carson, Geoffrey Hill , and Jorie Graham , are all, clearly, very intelligent people, aside from their work as poets.  But who reads Marianne Moore now, or Robert Lowell , smart poets? Or, Pound ?  How smart could Pound be with his madcap views? Less intelligent poets are often more popular.  John Betjeman was not a very smart poet, per se.  What do I mean by smart?

It is always sad news when a fiercely experimental, committed, and talented poet dies, and so it is that I was sad to learn that Sean Bonney has died, aged 50, in Berlin. Bonney and I often crossed pens online, in the past, and he was no friend to my ideas on poetics. But, he was a poet with conviction and brilliance, and every death is the death of a world. I wish sincere condolences to all who knew him, and loved him, and hope that his poems live on, in memory and print, discussion and study, for years ahead.