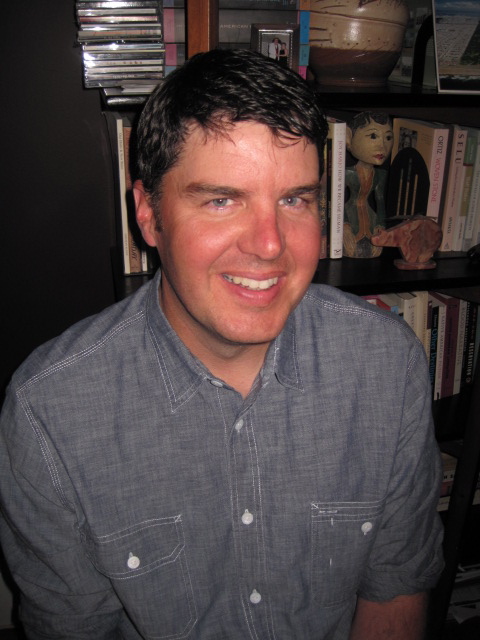 Eyewear is very glad to welcome American poet Dean Rader (pictured) this autumnal mid-October Friday. Rader has published widely in the fields of poetry, American Indian studies, and popular culture.  His debut collection of poems, Works & Days, won the 2010 T. S. Eliot Poetry Prize (American version), judged by Claudia Keelan.  In 2009, Kelly Cherry selected his poem “Hesiod in Oklahoma, 1934” for the prestigious Sow’s Ear Poetry Prize.  He is the author of a best-selling textbook on writing and popular culture, The World is a Text (with Jonathan Silverman), which just went into its fourth edition.


With poet Janice Gould, he co-edited Speak To Me Words: Essays on Contemporary American Indian Poetry (University of Arizona Press, 2003), the first collection of essays devoted to Native American poetry.  Most recently, he curated a special issue of Sentence devoted to American Indian prose poetry.  His newest scholarly book, Engaged Resistance: Contemporary American Indian Art, Literature, and Film is forthcoming in 2011 from the University of Texas Press. Rader blogs about the intersection of literature, culture, politics and media at The Weekly Rader, one of the best blogs of its kind in the English speaking-world, and he reviews poetry regularly for The San Francisco Chronicle for whom he has also contributed a number of op-ed pieces.


He has taught at SUNY-Binghamton, Georgia Tech, and Texas Lutheran University.  At present, he is a Professor of English at the University of San Francisco.  Rader is an American poet that readers in Britain should begin to get onto their radars, to state the blinkin' obvious.


Traveling to Oklahoma for my Grandmother’s Funeral,
I Write a Poem about Wallace Stevens
I
Early October and in Hartford,
The leaves leave on their orange parkas.
Winter sidles up like a bad salesman.
Section 14 of Cedar Hill Cemetery.
The grass, autumn-flecked, stubbles
up: the uncut hair of graves.
Twenty-three days from now,
A maple leaf will unzip and
Head to the hard world below
Lighting on the ground about seven feet
Above the darkening body of Wallace Stevens:
Fat man, terrestrial, invisible as a god.
II
October on United Airlines flight 5481, seat 7C.
I am traveling to Oklahoma for my grandmother’s funeral,
But all I want is to write a poem about Stevens:
The porch of spirits lingering, the grave in Hartford
Where he lay.  My grandmother lies on a table
In the Southland funeral home in Tulsa.
Her body flies out of her body at an astonishing speed,
As though with purpose or direction, like an airplane
funneling home inside some great blue tube of sky.
Like everything else, we are in transit.  We all sail
Toward the ocean of the dead, land of unknown arrival
And itinerary.  Who is  it that plans the schedule of ghosts?
III
The priest attending to Stevens
During his final days in the hospital,
Swears he made a deathbed conversion
to Catholicism, a claim his daughter denies.
I deny him nothing.  It is cold in Connecticut.
The heavenly palms and bright green wings
Of Florida might as well be in Ceylon or Esthonia.
Is it possible that in the dissolving moment,
Stevens asked something of the God he believed
Might be a poem, or a woman skating?  Who
Is to say that God took him seriously? At what
Point does the believer become the believed?
IV
The elderly woman next to me
In 7D has been peeking at this poem
For several minutes.
I don’t mind,
Because the next line is this:
She will die before I do,
As will the man two rows in front
In 5C and his wife in 5D.  But then again,
All of us on the plane could get there
In seconds.  In the reverse burial that is this sky,
We die forward into the nothing that is not yet revealed.
We are the fading Stevens: we have no idea what lies ahead.
V
I wake and realize it’s October 2, Stevens’s birthday.
In Oklahoma, the red dirt goes on being red—
The dogwoods, the willows, the beige bony wheat stubs:
The riven days of wind: the sky like a drive-in screen:
The sky like an empty page: the sky like an underground sea.
Take me down, I say out loud, in this soft silver coffin.
It’s the other world I want right now.  But Oklahoma spools
On below.  What I need is to ask my grandmother—
Her entire life a believer—if, in that flash of black light,
In that dissolving instant, she had the opposite doubts
Of Stevens; if she renounced the supreme fiction, the emptiness
Suddenly so clear, beyond the dividing and indifferent blue.
poem by Dean Rader, from his ward-winning collection Works & Days; reprinted with permission
featured poet

Anonymous said…
Kudos to Radar for his amazing debut collection! I had him as a professor at USF and he's truly one of the best that campus has ever seen. Here's looking forward to many more works ahead by this talented teacher, poet and writer!
Fri Oct 15, 06:13:00 pm 2010

PoInOak said…
I saw him read last week in Berkeley with Troy Jollimore. It was one of the funniest--maybe THE funniest--poetry readings I've ever been to. This poem is pretty humorous but it doesn't capture how funny the whole book is. It's already sold out at all of the bookstores in the East Bay!
Fri Oct 15, 09:20:00 pm 2010

bkd said…
Buy this amazing book. You won't regret it. A tour-de-force and fun yet intellectually engaging read from an all-around great poet and person. --From BKD at USF
Fri Oct 15, 10:15:00 pm 2010