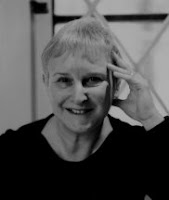 I follow the soft valley of your
nape, parting the hidden
shafts to the scalp, white and unwrinkled
as the skin of a boy I once saw
shivering on a field, his hair
teased into rosettes like a guinea-pig’s.

And yet the poems, although acutely embodied, elude physical weight; it is as if she has discovered a technique, in language, for levitation:

… Then a second time,
rounding a blind bend, the brush lifted
on a ground of sunlight, seeming to give us
darkness, the spine seeming to open
a new space hidden between tree trunks,

Or for stepping into and returning, gifted, from the world of the dead:

But no, they have
passed each other, they separate,
they have vacated the night’s mirror,
that last light from the sky,
the symmetry
that made disappearance necessary.

Wick’s poetry is not so much the poetry of a mother, or wife or daughter; it is not just the poetry of its subject matter, but an evocation of a realm of coming into being. The poems inhabit an altered state, like that of the newly delivered mother, attended by the proximity of death, and of life washed fresh in its glare.

These are small poems, delicately formed, often radiating from freeform sonnets, bright lit windows or doorways into vividly re-imagined worlds. They recall the fleeting but visionary attentiveness of the modern French poets, Guillaume Apollinaire, ‘The black curls on the nape of your neck are my treasure’ (‘Flare’), or Paul Eluard, ‘He puts a bird on the table and closes the shutters./He combs his hair and it is lovelier in his hands/than a bird’ (‘Void’) (Wicks is a French scholar and a translator of the contemporary French poet, Valerie Rouzeau). In recent work, her influence has been American, the poems opening out, discursive, such as in the long sequence, ‘MacDowell Winter’, in De-Iced, dedicated to the American writer’s colony, where Wicks does most of her writing away from the pressures of teaching in England. There is both the metaphysics of Stevens and the nature-mystery of Frost in this:

Before I came, I was this I shaped space
Somewhere in New Hampshire. Light from the sun and stars
Passed through my body; the sub-zero air; a deer.

Yet still, in her latest collection, what is specifically Wicks’: visceral and surprising, delicately miniaturist:

The horse girl startles,
whinnies at me, flares
the deep, dark crawl-space of her nose.