The Inner Circle of Contenders 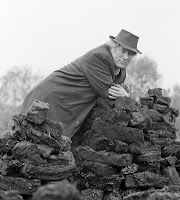 Seamus Heaney is undeniably THE major Irish poet of the second half of the 20th century, and, after Robert Lowell, Thomas, Larkin, Hill and Ted Hughes, likely the greatest English-language lyrical poet, in the Hardy-Frost tradition, since 1950. Of the great 20th century poets, he's possibly one of the Big Ten. I've met him - he's charming, and fun, and real. And serious. So, this new interview with him (related to a forthcoming book) is basically necessary reading for anyone concerned with poetry of our time (and of the past).

The excerpts here are frank, personal, and at times even intimate - the man comes through, as intelligent, principled, dedicated, and human - a sort of poetic Obama of the 60s/ 70s - a man who made poetry matter, for many, putting it down in soil it hadn't been rooted in before. Heaney has not, it is clear, made peace with the experimental wing of contemporary poetry - he calls it "a refusal of the kind of poetry I write" - which begs the question any mirror does - isn't his kind of poetry a refusal, equally, of the avant-garde sense of what poetic language entails?

Having done so much, so well, it's perhaps too bad Heaney hasn't also managed to undertake to comprehend, perhaps encircle or even transcend, such divisions in poetry - but then again, some kinds of avant-garde poetry are so dead-set-against the kind of post-romantic, post-colonial, pastoral-modernist lyric that Heaney writes, that maybe he gave up on this battle. More ominously, he describes a clear-cut route to poetic recognition, one which is perhaps grossly oversimplified - then again, Heaney faced no real obstructions in his rise, so evident was his ability - after all, he went from Faber to the Nobel, and never really had to eke out a rep in the margins, small magazines, and coffee shop open mics of the world. Still, his belief that reputations are now decided by decade, and that there is an "inner circle of contenders" for best poet, that, independent of marketing, easily knows who has "got it" and who has not - and his vision of poets celebrating the best when they meet (as opposed to doing-down poets they resent, which is often the case too) - would be naive if not a little chilling.

Heaney seems to naturalise, entirely, the process of poetic production, dissemination, and reception - as if taste, ideology, bias, nationalism, even simple ruthless competition - did not in fact also stand in the way of clear, cool, appreciation of the major poets. It's true, no poet without respect from any other poet is ever going to amount to anything, since it is by poet to poet that poetry is passed on, hence lives - but surely, there are many inner circles, and varying aesthetic values. Even religions have schisms, and no priesthood is without its heretics. Heaney reveals himself to be both inherently good, and conservative, in this interview. Nothing though takes away from the quality of the poems themselves, which ring clear as bells in winter.
ireland poetry Seamus Heaney

Alan Baker said…
"a refusal of the kind of poetry I write". A typical Heaneyism: sounds impressive, but what does it mean? It imbues unnamed experimental poets with an implied malevolence but without actually stating what it is. Do the said experimentalists refuse to write like Heaney, or is it that they refuse to acknowledge that his work is good, or is it that they 'refuse' it in some more sinister way, with suggestions of some kind of censorship. It's hard to refute without knowing who these people are and exactly what their 'refusal' amounts to. Indeed, the more I think about it, the more it seems like a phrase from a spin doctor.

Poets who are successful in a worldly sense seem prone to lashing out at other poets who are different (re Don Paterson's attacks in the past). Come on Seamus, live and let live!
Sat Nov 15, 04:06:00 pm 2008