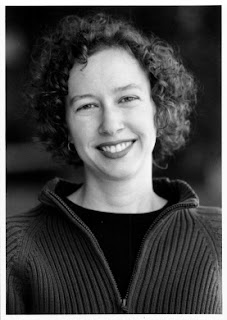 Eyewear is very pleased to welcome Stephanie Bolster (pictured) this Friday. Bolster is one of the very best, and most popular, of the new generation of Canadian poets. Her first book, White Stone: The Alice Poems (1998), won the Governor General's Award (Canada's top literary honour) and the Gerald Lampert Award - and will appear in French with Les Éditions du Noroît this autumn 2007, translated by Daniel Canty.
She has also published Two Bowls of Milk (1999), which won the Archibald Lampman Award and was shortlisted for the Trillium Award, and Pavilion (2002).
Bolster recently edited The Ishtar Gate: Last and Selected Poems by the late, very fine Ottawa poet Diana Brebner. She is also editing an anthology of poetry about zoos - and is guest editor for the inaugural The Best Canadian Poetry in English 2007 anthology.
She teaches creative writing at Concordia University in Montreal, Quebec. The poem below originally appeared in The Fiddlehead, and appears here with permission of the author.
Lingua Botanica

Words in the palm, loose gravel.
Words rising, the shapes unnatural.
Look at this, what I found, listen. Smell this flower-of-no-scent.
The mellion-ground, the ha-ha, the great bastion.
My kingdom for the knowledge what it means.
My kingdom for its lack of meaning – a pure
knot of music. Though I have not gone, I know
what is there. I eat it with my meal.