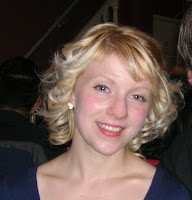 Eyewear is very pleased to be able to return to its irregular feature series on poets deemed worth a look - worth a read. And more. The first of the poets I am happy to welcome to these pages in the new decade, this Friday, is Liz Berry (pictured). Ms. Berry was born in the Black Country and now lives in London where she is an infant school teacher. She has an MA in Creative Writing from Royal Holloway and her poems have appeared or are forthcoming in magazines including The North, Poetry Wales, Mslexia, Poetry Review and Smiths Knoll. She is a winner of a 2009 Eric Gregory Award. I was happy to be able to include her performing the poem below on the recently released DVD, Asking A Shadow to Dance, 35 Young British Poets for Oxfam. This poem is also the title of her tall-lighthouse collection, out this summer. She's one of the best emerging British poets I have met in a long time.


The Patron Saint of School Girls


Agnes had her lamb and her black curls;
Bernadette, her nun’s frock;
but I was just a school girl,
glimpsed the holy spirit in the blue flare
of a Bunsen burner, saw a skeleton
weep in a biology lesson.

My miracles were revelations.
I saved seventeen girls from a fire that rose
like a serpent behind the bike sheds,
cured the scoliosis of a teacher
who hadn’t lifted her head to sing a hymn
in years. I fed the dinner hall
on one small cake and a carton of milk.

A cult developed. The Head Girl
kissed my cheek in the dark-room,
first years wrote my name
on the flyleaf of their hymn books,
letters appeared in my school bag,
a bracelet woven from a blonde plait.

My faith grew strong.
All night I lay awake hearing prayers
from girls as far as Leeds and Oxford,
comprehensives in Nottingham.
I granted supplications for A-levels,
pleas for the cooling of unrequited love,
led a sixth form in Glasgow to unforeseen triumph
in the hockey cup final.

Love flowed out of me like honey
from a hive, I was sweet with holiness,
riding home on the school bus,
imparting my blessings.
I was ready for wings,
to be lifted upwards like sun streaming
through the top deck windows;
to wave goodbye to school and disappear
in an astonishing ring of brightness.

Dale M. Chatwin said…
Hey I love the poem!! I am from the black country too, Sedgley, although I live in Portsmouth now, I have just set up a blogspot page for my writing and I have just started writing poetry, I would love some feedback from a pro :)
Wed Jun 09, 03:20:00 pm 2010