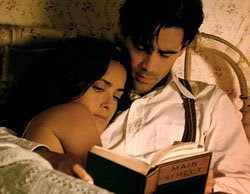 Morgan Harlow reviews
The Best American Short Stories 2008
edited by Salman Rushdie
Not many literary publishing ventures come as close to a sure thing as the Best American Series, annual anthologies in a growing stable of genres. The year's 'best' work, culled democratically from a wide-ranging list of periodicals, with final selections and an introduction by an editor at the height of popularity, has attracted a steady readership since the series inception in 1915.
The series' history, as well as the question, Why read? are topics of discussion returned to frequently in the introductions of The Best American Short Stories (BASS) and The Best American Poetry series, often turning on the present health of the story and on the state of poetry today. Salman Rushdie takes up that tradition, but asks, instead, obliquely, why write? leading, as Rushdie tends, to a higher, purer realm of understanding. Reader, writer and publisher take note f this remarkable truism, that reading and writing are, really, two sides of the same coin.
For Rushdie, a story's success depends upon "the sense that it had to be written, that it was necessary." It follows that what is necessary to write becomes necessary to read, and on the whole, in reading through BASS 2008, I felt Rushdie's choices held up to this criteria.
Rushdie also takes up the discussion of what is American, never more interesting in terms of ethical concerns than today. Not are you American, but what is it about the American that is meaningful. Here a skeptic like myself might interject that what is most American about the BASS is the entrepreneurial spirit of the concept itself. After the crisis we are all undergoing with the teetering (toppling?) of Capitalism, and with high hopes for change, it is well to look urther, to what is valid and good in an American way of influence, to find, as Rushdie does, that "the ethnic mix of this astonishingly diverse country, from Junot Díaz to Yiyun Li, has never seemed as rich as it does now, nor has its literature ever reached so far, into as many different worlds."
Indeed the stories here offer new and strange worlds and make them, in the space of a story, accessible, enlarging our understanding in the process. Perhaps my favorite is "From the Desk of Daniel Varsky," by Nicole Krauss, a self-reflective exploration of the role each and every one of us finds ourselves appointed with, as guardians of the knowledge entrusted to us by all of human endeavor: "I've always considered myself only a temporary guardian and had assumed a day would come, after which, albeit with mixed feelings, I would be relieved of my responsibility, the responsibility of living with and watching over the furniture of my friend, the dead poet Daniel Varsky, and that from then on I would be free to move as I wished, possibly even to another country."
Kevin Brockmeier's "The Year of Silence," is particularly astute to the influences and trends working upon a population, and subtle cultural nuances, such as the observation that stand up comedians are the first to notice and bring to the public's attention news of a phenomenon or situation.
In "The Worst You Ever Feel," by Rebecca Makkai, a boy with unusual sensitivity to the past is a lightning rod for our collective uneasiness over a world we never made and its horrible histories. Elements of artificial ordering clash with the intuitive of ghost images, heightening the story's effect. Alice Munro provides one of the most incredible arcs in reading experience with the story, "Child's Play." What begins as almost unforgivably mundane accrues across the course of the narrative to become startlingly powerful.
Most of the stories are engaging and several of them might easily be called exceptional. The opening language in a few of the stories felt overly dense; other stories were readable but problematic, reflective of what seemed to me to be odd decisions made along the way in the writing of them.
To read as a writer is to see choices made. Some you would never make yourself, others are ones you would have made, if only you had been writing the story and the same brilliant thought came to you as it did the author. This is what drives our preferences, and so it is a tall order to choose the stories for an anthology. The stories we enjoy come back as a reflection, perhaps a fun house reflection but a reflection all the same, of the reader.
With all this good work every year, do we sometimes feel overwhelmed as readers and writers? I'm reminded of Esther, recovering from food poisoning in Sylvia Plath's The Bell Jar, and her reaction when Doreen drops a volume of The Thirty Best Short Stories of the Year in her lap, eleven more volumes waiting in a box in the hall. A present, something to read while she was sick, and did she also want Doreen's leftover soup? "Bring it in," Esther said. "I'm starving."
Morgan Harlow is an American poet and critic. She reviews regularly for Eyewear.