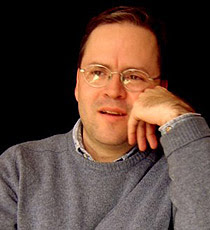 Eyewear is pleased to welcome Andrew Shields (pictured) this Friday. Shields was born in Detroit, Michigan, in 1964, and thereafter raised in Michigan, Ohio, California, and England. He attended Stanford University and the University of Pennsylvania (where he finished his PhD in Comparative Literature in 1995).

He has published poems in print and online journals in North America and Great Britain, and in the chapbook Cabinet d'Amateur (Cologne: Darling Publications, 2005). His many translations from the German include books by Michael Krüger, Dieter M. Gräf, Ilma Rakusa, and Joachim Sartorius, as well as the correspondence of Martin Heidegger and Hannah Arendt. In addition, he received an NEA grant in 2004 to translate the poetry of Jacques Réda from the French.

Shields lives with his wife and three children in Basel, Switzerland, where he teaches English at the English Seminar of the University of Basel. He is also a songwriter who plays guitar and mandolin, and is currently in a trio called Human Shields.

Looking out across the winter lawn
at trees he knew were there but could not see
for mist, he listened to the gramophone

a younger friend had brought to play him shellacs
purchased on a trip to America.
His hearing was not what it once had been

when he fiddled with the bands and sang
in churches all around the county,
but still those strains came trilling to

his infirm ears, which he'd insisted
were unable and unready to hear, to hear,
this brazen song, full-hearted, taking up

caresome things and making them carefree.
Did he care for these ecstatic tunes?
Did he sense that this was more

than a ditty of its time? As if all time
were the trumpeter's, Gabriel's gift,
insistent calls beyond the calls of bells,

keeping him dreaming like an unseen tree.
He sat there, leaning on his cane like a picture
hung and covered in a hall, like an old man

in his darkening study at the end
of a day, the end of the song, the end
of another year, and tried to hear.

How the trumpet blew, drowned out
the winter wind as he dreamed on,
somnolent, unaware, to this song

with an under-echo of what he'd played
at fairs and weddings, for the dancers
and the dance, unnoting, unwitting, unwrit.

Andrew Shields said…
Perhaps it is a violation of etiquette for me to post a comment on a feature about myself, but I would like to invite all Eyewear readers to come participate in my Daily Poem Project. Follow the link at the beginning of the feature (the one if you click on my name) and check it out! All you have to do is read seven poems and tell me which one you like best.
Fri May 09, 01:21:00 pm 2008