So Which Is It? 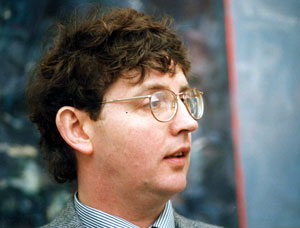 Only in England would the literate (if not literary) media still be bamboozled about Paul Muldoon (pictured) or rather, flabbergasted or then again puzzled - by his command of word-play, puns and other linguistic paraphernalia in his writing.

How else to explain the contrasting versions of Muldoonland displayed in recent issues of The Economist (October 21st-27th) and The Guardian? The Guardian's Saturday book section (The Review) has rightly selected his latest collection from Faber, Horse Latitudes, as Book of the Week, snatching it from the ghetto of the poetry review demi-page. James Fenton, himself a former Oxford Professor of Poetry, and major English poet, welcomes the book, Muldoon's tenth, as "an event". But over at the (more conservative) Economist, the unidentified reviewer is more economical with their praise of another new Muldoon publication, his Oxford lectures, The End of the Poem.
The reviewer of these 15 lectures seems slightly overwhelmed: "He dives into the etymology of words, and then relates these discoveries to far-flung biographical and historical fact. At times, his insights can be acute, at others far-fetched and almost outrageously fanciful. ... Mr. Muldoon's literary method, for all its delightfully readable questings, seems to add hurdles rather than eliminate them ... undermining the the notion that poetry has a universal appeal."
There is almost nothing insightful in these remarks, and it staggers the imagination to consider this was likely written by a leading (if anonymous) London critic or poet. The first question is 1) what is far-flung about historical context?; 2) when did reference to the etymology of words in a poem become in any way part of a fanciful methodology?; 3) since when was the reading of poetry a race, or rather, a race that was meant to be short of hurdles?; 4) The Economist seems to want as unrestricted access to the "meaning" of a poem as it does to markets; 5) "Poetry" does not - and never had had - a "universal" appeal - and only the worst sort of bumbling Liberal Humanist from 1904 would want it to (say in some proto-Kipling way).
Rather, poetic language has always been separated from the language of commerce, trade and politics (the quotidian) by precisely its recourse to what Veronica Forrest-Thomson famously called poetic artifice. One does not have to go as far as her in excising external expansion to realize that interpretation of poetry is best when it starts with some idea of the poem as a unique construct of signs and strategies, and moves on from there. It is true that this chafes against Muldoon's interest in the fallacy of the author, but only until one stops to recall the reasons why he wants to tie life and times in to the lingo - to show how poets only refer to the world that resonates with the playful, formalist elements their art ultimately relies on to thrive.
So-called "mainstream" British poetry still tends to suspect any poem or poet that does not wear its metaphor on its clear-as-glass sleeve. It would be far more useful to consider that both the concepts of "lyric ego" and "poetic artifice" form part of a spectrum of culturally-established aesthetic options and opinions, and could be just as interestingly conjoined as opposed, in quite the right poetic setting. Indeed, Muldoon's work is a superb example of such a place, where the innovative and the lyric join hands. It is this that puzzles those that want their poems universal, not in the university.
Meanwhile, Eyewear keeps its lemon-coloured Muldoon Collected close at all times, as an Arnoldian touchstone of bon mots, and considers Muldoon one of the great poetic stylists of the last 50 years, along with Ashbery, Charles Bernstein and a few others. Few other poets have so successfully made their eccentric signature tone and rhythm so seemingly inevitable (Dickinson, Auden and Larkin come to mind as precursors) in the process making a world. Of the great Irish word-wits, he seems to have become part of the list that includes Swift, Wilde, Shaw and Joyce.
http://books.guardian.co.uk/review/story/0,,1927298,00.html
http://www.paulmuldoon.net/